The outcome of the disqualification petition will have a wider impact across country: HC 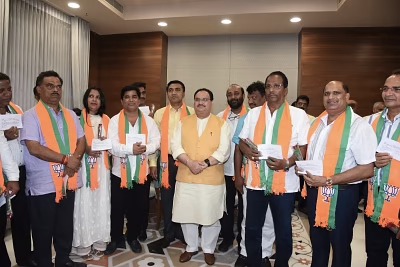 PANAJI: The Bombay High Court at Goa on Wednesday agreed with the petitioner’s contention that the disqualification petition against ten ex-Congress MLAs will not impact the prospect of these incumbent legislators, who are now part of BJP, during the February polls.
The Division Bench hearing the disqualification petition filed by Congress President Girish Chodankar against ten of its former MLAs said that the petition’s outcome will have a wider impact across country.
The matter will now be heard on February 1, along with the MGP petition filed against two of its former legislators.
Chodankar has challenged the Speaker’s verdict delivered in April this year, dismissing his disqualification petition against 10 former MLAs for defecting to the Bharatiya Janata Party (BJP) in July 2019.
On the other hand, Adv Carlos Ferreira said he would request the Court to file their petition on behalf of the Maharashtrawadi Gomantak Party (MGP) and the Congress petition.
Ferreira, arguing on behalf of the MGP MLA Ramkrishna (Sudin) Dhavalikar, has also challenged the Speaker’s judgment dismissing his disqualification petition against two former MLAs – Deputy Chief Minister Manohar (Babu) Ajgaonkar and PWD Minister Deepak Pauskar, who defected to BJP in March 2019.
The Goa Assembly Speaker Tuesday dismissed the disqualification petitions filed against 12 MLAs – 10 from the Congress and two from the Maharashtrawadi Gomantak Party (MGP) – who defected to the BJP in 2019.
The Speaker’s decision comes a year and a half after a preliminary hearing was held in the petition filed by Congress leader Girish Chodankar in October, 2019. Chodankar and MGP leader Ramkrishna alias Sudin Dhavalikar had moved the Supreme Court seeking directions to the Speaker to decide the disqualification petition pending for several months.
“The biggest hurdle was to get a decision from the Speaker. It is the first hurdle we have cleared. This decision is not in consonance with the Constitution. We are going to test this order,” said lawyer Abhijit Gosawi, who argued on behalf of Chodankar, President of the Goa Pradesh Congress Committee.