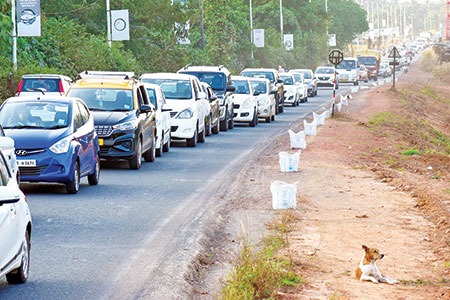 Panaji: With thousands of tourists descending in Goa to celebrate the New Year, the traffic congestion has become a nightmare for travellers as well as the locals.

Saturday saw traffic chaos at several important junctions in the state with Agassaim-Cortalim being the worst hit.

Several passengers missed their flights and trains due to a five hour long jam.

To add to that two minor accidents were reported on the Zuari Bridge in the afternoon further leading to the slow traffic movement on the route which continued till evening.

Vasco Traffic Police Inspector Sudesh Narvekar informed that the traffic congestion at the Zuari bridge stretch started at around 12.30 pm and which went till 5.30 pm.

In between at around 2.40 pm there was a minor accident between cars and one more minor accident at around 3.30 pm on the bridge and this further triggered the oncoming traffic which is supposed to pass through the bridge to get pilled up. We are managing the traffic although there is no traffic jam but yes there is slow movement of traffic” he said.

A local source from Cortalim informed that even during ate evening there was very slow movement of traffic on both sides of the Zuari bridge and people staying at this stretch have to suffer due to traffic as well as due to the dust pollution which happens due to large number of slow moving vehicles which pass through the untarred roads.

The ongoing work on the Zuari bridge and so also highway expansions across the State have added to the chaos.