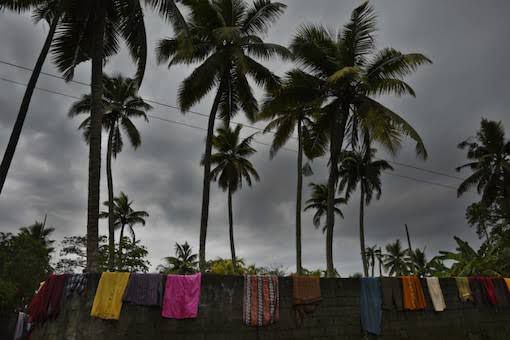 CANACONA – The Unseasonal rains once again lashed Canacona early Thursday morning, bringing the soaring mercury down to bring great relief to the residents.
Incidentally, the soaring temperature accompanied by the damp squib in the atmosphere throughout the Wednesday brought down a sprinkle of showers through the night, which at times brought heavy pour past midnight.
Due to light drizzle, incidents of two-wheelers skidding on the road were reported, while at least two accidents involving 4-wheelers were reported elsewhere in the taluka.
By wee hours and early morning, heavy rains again lashed several parts of Canacona taluka.
Some of the people were seen carrying umbrellas since early morning.
Devotees attending a Tridium mass at Miraculous Holy Cross – Vall (Agonda) attended the Novena mass with umbrellas, informed source.
Meanwhile, a scheduled inauguration of Hot-Mix works at Kudai to Kazumoll (village Khola) on Thursday morning is postponed. Now, Quepem MLA Altone D’Costa is supposed to inaugurate the works on a new date, informed sources.
Incidentally, Khola, Agonda, and Loliem-Polem panchayat areas were in the dark throughout Thursday morning due to an earlier announced power shutdown for monsoon maintenance and tree-cutting works. The Shutdowns had, however caused inconvenience to the residents, even as the cloudy but hot and humid atmosphere kept the heat soaring high till afternoon time.
On Friday, there will be no power supply to the entire village of Poinguinim as the Electricity department will carry on line maintenance and tree cutting works as monsoon preparations from 8 am to 1 pm, informed sources.

Goemkarponn desk QUEPEM: Villagers of Morpilla took a special drive to clean up the garbage dumps from the Morpirla panchayat area. According to the villagers, ... Read More

Activists meet CM on coal, give deadline of November 14 to shut coal operations at MPT