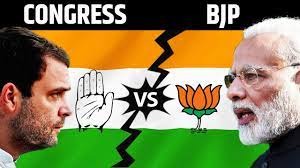 Goemkarponn desk
PANAJI: Goa Bhartiya Janta Party spokesperson Savio Rodrigues on Monday hits out at Goa assembly Leader of Opposition Yuri Alemao’s statement of calling ‘Rahul Gandhi has a blood relation with Mahatma Gandhi’. “Vadra Congress does not carry the legacy of Mahatma Gandhi”, the BJP leader said.
Taking to Twitter Goa Leader of Opposition Yuri Alemao said “Our leader Rahul Gandhi has blood relation with Mahatma who shed his blood for inclusive India. Rahul Gandhi’s grandmother Indira Ji also shed her blood for united India. Indian soil has blood of Rahul’s father Rajiv Gandhi who was brutally assassinated”.
“Rahul Gandhi toes Mahatma’s path of compassion eschewing any form of vengeance on his father’s killers. We are followers of Gandhiji’s humanistic values and respect to diverse cultures and lifestyles.” “Rahul Gandhi has blood relation with Mother India”, he added.
Replying to which BJP spokesperson Savio Rodrigues released a video on his Twitter handle and said that Rahul Gandhi, Rajiv Gandhi or Indira Gandhi are not blood relations of Mahatma Gandhi, they are blood relatives of India’s first Prime Minister Jawaharlal Nehru.
“There is no doubt that Rajiv and Indira Gandhi like Mahatma Gandhi were victims of an act of terrorism. But like in the case of the death of Rajiv Gandhi other people too died, but you do not have people appropriating the name of Gandhi”, he added.
“Congress has been misusing and misappropriating the legacy of Mahatma Gandhi for years now. It is time that Congress renames itself as the Vadra Congress and not the Gandhi Congress. They do not carry the legacy of Mahatma Gandhi”, Savio further said.
Earlier, Savio Rodrigues welcomed the ban on the Popular Front of India and its affiliate organisations and described the PFI as a wolf in a ‘sheep’s clothing’ and said the outfit’s intent was to create an “Islamic caliphate” in the country.
“The frontal aspect of the PFI is that of a social organisation. But behind the scenes they are diabolic. PFI is known to have links with terror organisations like ISIS, al-Qaeda, Hamas and also Pakistan’s ISI,” Savio Rodrigues said. (ANI)