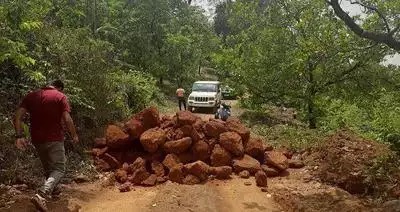 PANAJI: The Forest department has suspended the Range Forest Officer (RFO) Vivek Gaonkar for failing to stop the hill cutting work in the eco-sensitive zone at Vagheri despite directions.
Also, a show-cause notice has also been issued to the then Deputy Conservator of Forest (DCF) Santosh Fadte for violating directions. Seeking a reply within seven days, DCF is asked to show cause as to why action should not be taken against him.
On Monday night, Forest Minister Vishwajit Rane had directed PCCF to suspend RFO and show cause DCF over ongoing work at Vagheri Hills.
“I have instructed the PCCF to suspend the RFO on duty, and a show-cause notice has been sent to the then deputy conservator of forests in charge. If the explanation is not satisfactory, the DCF will be suspended as well,” he had warned.
The Forest Minister reiterated that no hill cutting, filling of low-lying fields, khazan lands, or similar activities will be tolerated.
“Similarly, I have directed the DCF to keep an eye on the lapses happening in the department. Such lapses will not be tolerated,” he added.
Following the reports in the first week of May, Rane had sent a team of forest officials to the Vagheri hill, directing it to stop the illegal hill cutting.