Vijayadashami: The Triumph of Righteousness 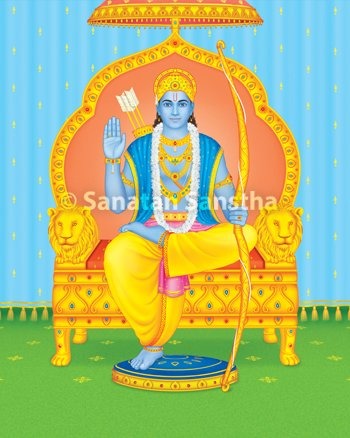 Vijayadashami (Dussehra)
One derivation of the word Dussehra is from dashhara. ‘Dash’ means ten and ‘hara’ means defeated. Nine days before Dussehra, in the nine days of Navaratri, all the ten directions are saturated with the female deity’s (devi’s-Shakti) energy. ‘Shakti’ has control over creation in all the ten directions (dikbhav), attendants (gan), etc. That is why this day is known as Dashhara, Dussehra, Dassera, Vijayadashami, etc. This is one amongst the three and a half auspicious period (muhurts) of the year. This falls on the tenth day (dashami) of the bright fortnight of Ashvin. The immersion of the Navaratri (female deity) is done on the ninth day (navami) or the tenth day. Four rituals namely crossing the territory (Simollanghan), worship of the Shami tree (Shamipujan), worship of the deity Aparajita (Aparajitapujan) and worship of instruments (Shastrapuja) should be performed on this day.

Rituals to be performed on Vijayadashami
1. Crossing the territory (Simollanghan)
In this ritual the territory of a village is crossed in the north-east direction in the third part (‘prahar’) of the day, that is in the afternoon. And one should stop at a Shami or Apta tree. 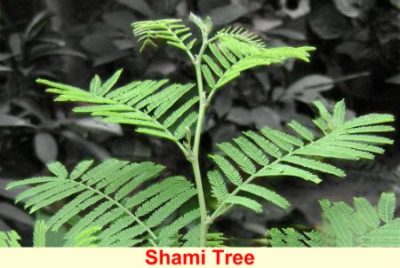 2. Worship of the Shami tree (Shamipujan)

The Shami tree is worshipped with the recitation of the following prayer.

Meaning : The Shami tree cleanses sins. Its thorns are reddish in colour. It is Lord Rama’s favourite tree and in such a tree Pandavas hid their arms. O Shami, Lord Rama has worshipped you. I now embark upon my journey to victory. May you make it pleasant and free from obstacles. 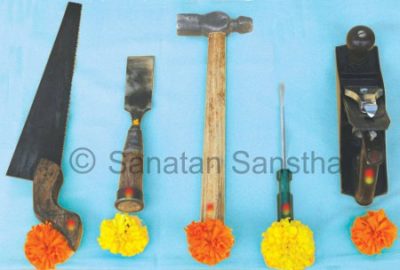 3. Worship of the Apta or Ashmantak tree
The Apta tree is worshipped with the following mantra :

Meaning : O great Apta (also known as Ashmantak) tree, you are the one who overcomes great defects. Unite me with my friends and destroy my foes.

Then rice, a betelnut and a gold coin (copper coin as a variant) are placed near the roots of that tree. After circumambulating the tree, some mud from its base and some of its leaves are brought home. Leaves of the Apta are offered as ‘gold’ to God and friends. Conventionally, gold should be gifted by the young to the old. In Maharashtra, there is a custom of gifting gold to family members and friends on Dussehra. This has a historical significance too. After a military expedition, the brave Marathas would bring home the plundered booty from the enemy’s territory. These victorious warriors were welcomed by their wives or sisters with Arti (a prayer sung with the waving of a lamp). In return the warriors would give some gold ornaments from their plunder. The warriors then placed their loot before the deities in the temple of the house and offered obeisance to God and elders seeking their blessings. Nowadays, this is commemorated by distributing leaves of the Apta tree, symbolizing gold. 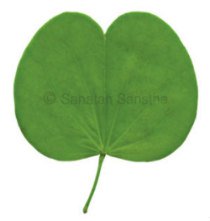 Translation : O deity Aparajita, You who adorn a necklace, a glittering golden girdle and who blesses devotees earnestly, bestow victory upon me.

In some places, this Aparajita-puja is also performed before leaving for the ritual of crossing the territory.

On this day soldiers and the feudal princes clean their weapons, arrange them in a row and worship them. Farmers and artisans too worship their respective implements or instruments. Some also perform this ritual on the ninth day of Navaratra.

The royal way of celebration
Since Dussehra is a festival of triumph, on this day special rituals have been recommended for nobles and kings. This is a festival signifying victory and valour. Before Arjun went into hiding (adnyatvas), he placed all his weapons in the hollow of the Shami tree. But on this day when the Kourav army was herding away King Virat’s cattle, Arjun pulled out his weapons from the Shami tree and confronted the army and defeated them. It is believed that Lord Ramachandra too slayed Ravana and emerged victorious on this day. To signify these events, this day has been named Vijayadashami. Actually this festival was celebrated even in ancient times. At that time it was a festival of the peasants. A peasant would celebrate it after bringing home his first monsoon harvest. During Navaratra, on the day of installation of the pot (ghatasthapana) nine types of food grains are germinated in the altar (sthandil). On the day of Dussehra the sprouted grains are pulled out and offered to the deities. In several places the main door of the house is decorated with sheafs of rice grains. This custom also depicts that it is a festival of the peasants. With the passage of time this festival became religious in nature and in the historical ages, it became a political one. (Ref: Bhartiya Sanskritikosh, Volume 4, Page no.319,320)

Goemkarponn desk PANAJI: It’s a rare coincidence that the smallest State of Goa which recorded its first COVID19 death on June 22, 2020, has completed ... Read More

Is Khaunte heading to BJP? The MLA denies

Goemkarponn desk PANAJI: Amidst the high-voltage political drama in the State, the former Zilla Parishad member from the Porvorim Assembly constituency resigned from the Congress ... Read More

Goemkarponn desk BICHOLIM: This pandemic might have hit many but there is a section of people who seem to have taken the opportunity for farming ... Read More