Another success story from far off Canacona 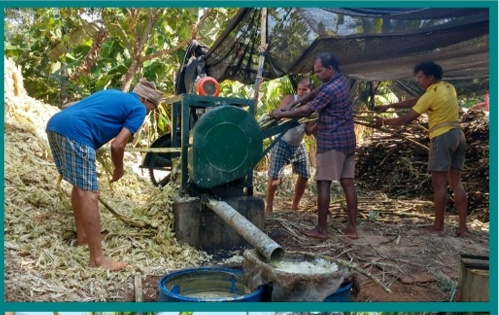 CANACONA: Always looking for light at the end of tunnel rather than looking at the darkness in the tunnel is the trait of Daya Gaonkar, sarpanch of Khotigao panchayat as he has once again shown to the world by starting a jaggery making unit in remote Khotigao.

Concerned over no takers for the tons of sugarcane grown in Canacona he says he wanted to be a ray of hope to the poor farmer’s who had toiled hard to make the sugarcane ready and when it was time to harvest there was no market for their produce.

Sugarcane growing has been undertaken as a cash crop by many farmers in Canacona which they used to harvest and send to sugar factory at Usgao but since the factory shut its operations the local farmers were in a dilemma of sorts as they didn’t had any other market for their produce.

Canacona produces close to 10 thousand tons of sugarcane annually and has 130 ha agricultural area under this crop.

That’s when Daya Gaonkar hailing from Khotigao struck upon the idea of starting a unit to add value to the sugarcane by making jaggery.

He says that the process is simple and involves extracting juice from the sugarcane, filtering it and thickening it by boiling it in huge pans, the juice needs constant stirring he says.

The thick syrup is then poured in a tray to dry.

The jaggery is made by traditional methods and doesn’t involve addition of any chemicals except lime which is added to separate out impurities and other waste.

His unit apart from helping farmers to get a ready market for the sugarcane has helped to give employment to locals from his village.

This unit which is labour is makes 600 kg of jaggery each day which is packed and sold all over Goa he proudly says.

Earlier local jaggery makers would sell jaggery for 250 rupees a kg which he is making available for just 150 rupees he informed.

This is one of his many initiatives he has undertaken to help farmers in the area by buying their produce. And adding value to it by processing has become topic of discussion when there is nothing to talk about but Covid-19 local says with pride.

The unit which was started in January this year has till now produced 25 thousand kg of finished jaggery and sold locally as well as out of Canacona Gaonkar proudly informed.

“Sanjivani sugar factory at Usgao is closed for now and the farmers were in a quandary as to what and how they can sell sugarcane after harvesting, some even sent the crop out of Goa but it was not viable due to increased transportation costs”.

“Most of the farmers now have a local ready market to sell their produce at a competitive rate and it’s a win-win situation” Gaonkar added.

When asked how he can juggle between the two roles as a sarpanch as well as an entrepreneur he said that its love for both which keeps him going.

When this correspondent met Canacona Zonal Agricultural Officer Kirtthiraj Naik Gaonkar he exuded both happiness and confidence as now the new generation of farmers are going a step ahead and not only content with selling their farm produce but are processing to increase their income.

“This is just one example as Canacona has become a taluka of so many farmer success stories” Naik Gaonkar said.