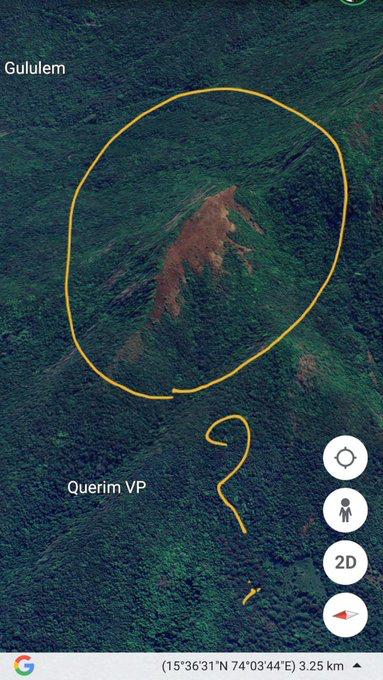 PANAJI: The Vaghueri hill cutting has become a major issue in Goa today with the new TCP Minister Vishwajit Rane updating about the action taken
One Pratapsingh Rauji Ranealmost on a daily basis.
Rane, who happens to be the forest minister, too has suspended the range forest officer and also issued a showcase to the DCF.
Now it comes to fore that one Pratapsingh Rauji Rane alias Ranesardesai and other co-owners of the property, residents of Keri Sattari Goa had written to the Range Forest Officer, Tulshimala, Pare Satteri Goa, requesting permission for bush cutting for
demarcation of boundaries on 12/04/ 2021.
They said that there exists an immovable property known as “VAGUERI* admeasuring an area of 50,02,875 sq. meters and is surveyed
under Survey No. 102 Sub-Division No.1 of Village Querim, Taluka and Registration Sub-district of Sattari, District North
Goa of the State of Goa, which exists within the jurisdiction of Village Panchayat Querim; earlier described/registered in the Land Registration Office (Conservatoria) of Bicholim at
Bicholim, Goa under No. 5445 of Book B-14 (new) and not enrolled in the Revenue Office for Matriz purpose,
“The undersigned Applicant and the other co-owners are well seized of ownership & possession of undivided share in the said property, and as such, his name is duly recorded in the record of rights of the said property in Form I & XIV as
Occupant,” they wrote.
Further, they said that in order to avoid any disputes and or inconvenience, the
undersigned Applicant desires demarcation in the said property and construct boundary marks thereon for identification thereof.
“That no prejudice would be caused to the other Occupants in the said Property. In view of the above, it is, therefore, requested before your good selves to kindly issue permission for bush cutting to demarcate the above-said property,“ the applicants wrote.

Rane says the action would be taken…

“I’d like to draw attention to how illegalities have occurred. Looking at the two images, we can see that the #hill at #Vagheri has been cleared from the top, but no report has been filed. This is done by a few landowners who have sold their property to outsiders,” the minister said.
He said the whole point is to show the people how the canopy has been removed. This was brought to my attention using the satellite and #Google imagery.
“I will instruct the department to adopt this technique to monitor eco-sensitive areas every 15 days,” he said.
Rane said the PCCF, CCF, North & South DCF, & a member secretary will lead an investigation on the systematic #forest canopy clearance. “The report must be submitted as soon as possible. CTP from the north and south will also be included. An inquiry will be initiated in this regard,” he said.
This system will be implemented in the @goaforests Dept. A Nodal officer will be appointed for the same along with a team to monitor such violations so that people don’t take advantage of the law, he said.

CAN U HEAR ME? Even 10 years after ruling, BJP CM BLAMES Congress for connectivity failure

Goemkarponn desk PONDA: Even after ruling Goa for 10 years, the BJP in Goa seems to be still crying in the name of Congress for ... Read More