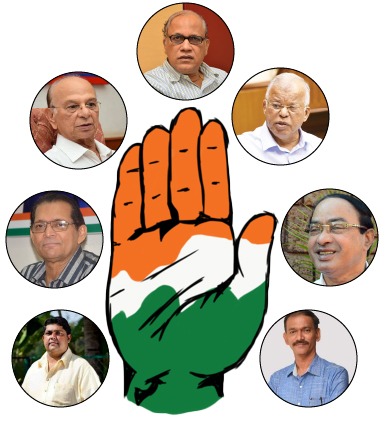 GAURANG PRABHU / Goemkarponn
MARGAO: The Congress (Goa Congress) party has dominated Salcete taluka to date. However, during the anti-Congress wave of 2012, party MLAs in the taluka reduced from seven to two.
This was considered a big blow to Congress. But, 2017 Assembly elections, the party won six out of eight seats, thus making a comeback with a bang.
Against this backdrop, the ongoing debate of whether Congress will retain power in the 2022 elections is currently under discussion.
According to the new changes in the Congress, Pradesh Samiti, who will be the Congress candidate in the eight constituencies in the taluka, is under discussion. Arguments have been surfacing over as to how the party would deal with it if there is a revolt.
With Congress MLAs in the three constituencies of Margao, Navelim and Curtorim, it is almost certain that Digambar Kamat, Luisinho Faleiro and Alex Reginald Lourenco will be re-elected.
However, former district panchayat member Moren Rebello has claimed the party ticket from Curtorim.
The Congress-Goa Forward-Nationalist Congress alliance has not been formed yet, and the Congress does not seem to be in a very good position in the Fatorda constituency. Also, it is unlikely that it will be ahead of Churchill Alemao in Benaulim.
It remains to be seen what role Royla Fernandes will play as Mickey Pacheco claims Congress candidacy there.
Aam Aadmi Party’s Venzy Viegas is also expected to face a tough challenge from Congress.

The real test in Nuvem, Vellim, Cuncolim
Giving candidature to Congress in Salcete taluka will be a real headache in the three constituencies of Nuvem, Vellim and Cuncolim.
Alex Sequeira’s candidacy for the post of state committee chairman is being considered, but Mickey Pacheco and Raju Cabral are also in the race.
Elvis Gomes has challenged Yuri Alemao in Cuncolim, while Joel Dias, Savio D’Silva and Benjamin Silva are the three aspiring candidates. Therefore, the possibility of a last-minute mutiny in all the three constituencies cannot be ruled out, and this would be a real headache for the Congress party.

Rane, Ravi kept out.
It looks like Congress high command started taking Goa elections very seriously. For the first time, Congress high command took a bold step to keep senior-most leaders, both ex-Chief ministers Pratapsingh Rane and Ravi Naik, out while constituting different committees for coming elections. The reason to keep both senior leaders out is their sons are in the ruling party.

Luizinho Faleiro gets more power
By making the election committee chairman, party high command informally has given more powers to veteran leader Luizinho Faleiro.
Luizinho will play a major role in candidate selection while Girish will be heading party work.
Faleiro says that he had personally requested high command not to appoint him as PCC president.
“I am happy that the party has accepted my request. As a disciplined Congressman, I will accept any assignment given to me by the party and perform to the best of my abilities,” said Luizinho Faleiro.
Curotim MLA Aleixo Reginald Lourenco refused to comment on the new developments saying, “No comments is the best comment.”