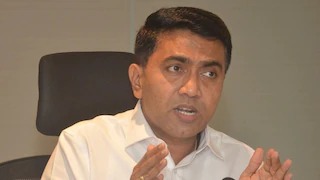 Phogat’s family on Saturday met Haryana CM Manohar Lal Khattar at his residence and demanded a CBI probe into the actor’s murder.

“Haryana CM spoke with me, requested thorough investigation. He wants CBI to take over after family members met him and asked for same. I don’t have an issue with it. After all formalities today, if required, will give this case to CBI,” said CM Sawant

He further said that if necessary, probe will be handed over to CBI.

Goa Police yesterday had arrested an alleged drug peddler and the owner of the restaurant and beach shack that Phogat had visited hours before she died.

Phogat’s personal assistant Sudhir Sangvan and his aide Sukhwinder Singh have been charged with the 42-year-old actor’s murder and the police had said that they had given her an “obnoxious chemical substance” mixed in a drink.

CCTV footage from the restaurant had shown Phogat being escorted to the bathroom of the restaurant by one of the men accused of committing her murder.

CM Khattar assured all possible help to the deceased actor’s family. He told the BJP leader’s family that he had spoken to the Goa CM about the matter.

CM Khattar said the Haryana government will write a letter to the Goa government about the CBI inquiry.