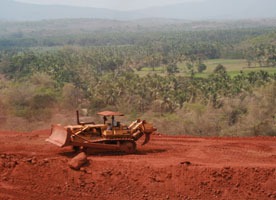 The Summary of Auction…. 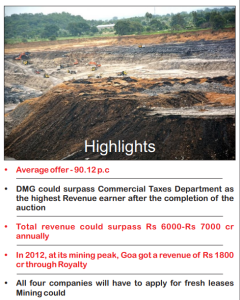 PANAJI: After passing through a critical financial crisis since 2012, when the mining operations first came to a grinding halt in Goa, the State government could now see a windfall in the mining phases.

With just four blocks auctioned, which have reserves worth ₹43k crore, Goa now definitely feels the bad days are over.

“The resource value of four mining blocks at Mulago, Sirigao-Mayem, Monte-de-Sirigao and Kalay, which have 135 million tonnes approx. Of iron ore reserve, is estimated at Rs 43,000 crore,” said Dr Suresh Shanbhogue, Director of Mines and Geology.

He further said that as per the tender document, the successful bidder of each mine will have to pay an advance premium of 0.05 per cent of the total 43,000 crores.

“The figure comes to around Rs 215 crore, and the successful bidder will have to pay 20 per cent of this amount immediately once it is declared the preferred bidder,” he added.

He states that all the above mines will require fresh Environmental clearance.

“…but it won’t be difficult because it already had EC. If the company manages to get the clearance within six months, mining activity is likely to start after the next monsoon,” the director said.

Two leases can get EC within the State that is Block 2 and 3, which are below 250 hectares and 5 km away from the wildlife sanctuary. Block 1 is around 480 hectares and goes to MoEF, so it has to apply for MoEF&CC, while Block 4 will need EC from MoEF&CC because even though it is below 250 hectares, it is within 5 km of Wildlife Sanctuary.

The second Phase Requires no ECs

While the First Phase has been a successful one, the second Phase will be easier to start mining as all these seven blocks are expired leases.

According to Section 8 (b) compliance of the MMDR Act, leases which had ECs during 2006 notification do not require any fresh approvals leases.

Even though their leases expired, the approvals are valid, said Shanbhogue.

As was given to be the situation that the mining auction could spell doom for local mining companies, it has turned out to be exactly the opposite.

There have been no Adanis and Ambanis in the fray; even though JSW competed, it could not match the local bidders.

Three of the companies retained their own mines, like Vedanta Ltd, Rajaram Bandekar and Sociedade de Fomento. Chowgules did not compete, and hence Salgaocar Shipping got a chance.

With the State finances expected to stabilise with the windfall of mining auction, Goa may not need to borrow from open markets.

Infact Goa can repay the debt and become one of the highest earning small states in India.

Goa had earlier invited tenders to participate in an electronic auction for the grant of mining lease in respect of iron ore mines in the State.

The grant of a mining lease by the government in respect of the aforesaid mine will be subject to the making of necessary payments, completion of other terms and conditions of the tender document, obtaining of necessary approvals from various government departments and execution of necessary agreements in the matter.

The State has completed the first phase of the auction of mining blocks, with four companies winning bids for the extraction of ore from different mineral-rich stretches of the coastal State.

The industry, which used to be one of the major revenue earners for the State, had come to a standstill in 2018 after the Supreme Court quashed 88 mining leases.

The directorate of mines and geology, through the Metal Scrap Trading Corporation, had on September 30,2022 invited tenders to e-auction the four.