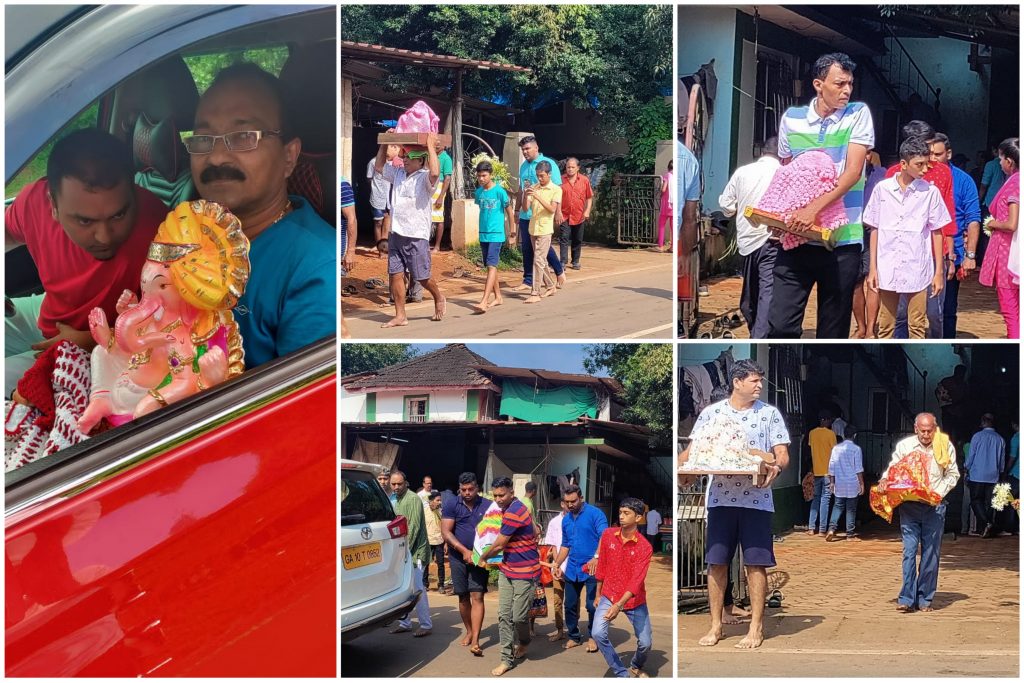 CANACONA – After the week-long preparations, the D-Day has finally arrived as the Lord Ganesh, made its maiden entry into the houses of many devotees today.
In an usual and anticipated rush of people, albeit with vehicles as mode of transportation (a modern deviation from the traditional practices of walking with the idol overhead), many devotees purchased their idols from various workshops and transported the same in thier vehicles (cars/2- wheelers) to their respective houses.
The rush of vehicles at the twin Chari workshops has compelled police to regulate the trafic discipline which often leads to hindering smooth flow of highway traffic since early Wednesday morning. Traffic personnel were seen regulating traffic flow.
Some of the devotees were seen coming out of the workshops carrying the covered idol of Lord Ganesh on their heads, while others carried it in their hands, and in some cases two people were holding the bigger sized idols) before placing it in their Vehicles. The others transporting the idols on two- wheelers were seating with the idol as pillion riders. In most cases, the idols were covered with a piece of cloth while transporting to their homes.
Interestingly, a few of the devotees takes the idol delivery previous day, but installs the same only on the day, for worship and reverence, which normally takes place by afternoon time.
While the women folks are busy in cooking, the men goes from house to house to perform Aarti. Only after rituals of Puja/Aarti is performed, food is served in the family and visitors.
Approximately 2000 households in Canacona taluka are beleived to be worshipping Ganesh Idols for various days .
In most households, the idol of Lord Ganesh is worshipped for 2 days ( which in local terms called ‘one and half day’), while some household regularly worship for 5 days, but rest others who made specific vows revere the Ganesh idols for 7 days, 9 days, 11 days and a maximum of 21 days before taken for immersion.
The Ganesh Idols at the various Sarvajanik Mandals at Khola, Agonda, Char-rasta, Chaudi, Palolem, Rajbhag, Canacona Police Station, Shrishthal, Gaondongrim, Khotigao and Loliem are also installed on Wednesday itself, and revered between 9 to 11 days – END