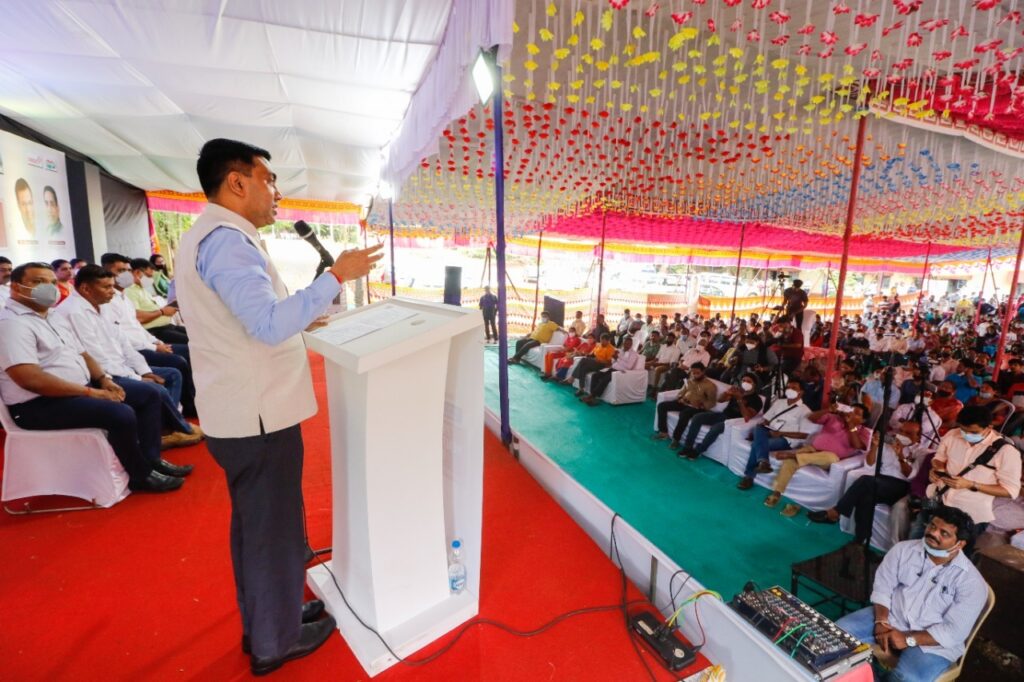 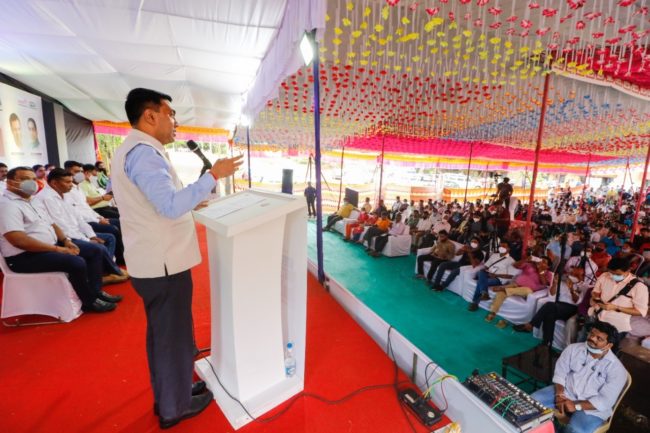 Addressing hundreds of people in Betki; CM asks people to follow SOPs as COVID is not over yet
Betki was in a panic as a dignitary on stage tested positive for COVID
CM announces Tele Medicine Health Service for Goans from 2 October

Goemkarponn desk
PONDA: The Chief Minister, Dr Pramod Sawant, continued his large gatherings ahead of the 2022 Assembly polls irrespective of COVID19 norms.
Shockingly, addressing hundreds of people, he said, “COVID19 is not over yet, and we need to continue to follow precautions.”
CMs speech did not match his action as it was said that one of the dignitaries who shared the stage with the CM and HM tested positive.
The rumours could not be authenticated, though, but the Bethki village was in a panic.
Chief Minister further said that Covid 19 pandemic is still not over as some severe cases are still coming up.
He further said that the State government is prepared for the third wave of covid.
Further at teh function, CM declared that his government would soon provide doorstep administration for Goans.
He also announced to provide Tele Medicine Health Service for Goans from October 2.
Sawant said the details of the doorstep administration would be provided soon.
“Under Tele Medicine Health Service Senior citizens can call doctors at Hospital and get medical treatment sitting at home,” he said.
Dr Sawant said that in these pandemic times, there is a need for teleconsultation by doctors.
“Medicines could be provided at home. Only in case the of complications patients should be called in hospitals,” he said.
Sawant was speaking after laying the foundation stone for up-gradation/ reconstruction of 25 bedded fully equipped Primary Health Centre, Bethki in Priol Constituency at an estimated cost of around Rs 29.57 crore.
He said he discussed this scheme with Health Ministers and health officials.
After the start of this service, fifty per cent of patients would avoid visiting the hospital at the time of the Covid pandemic.
He said he started this scheme because people travel at District hospitals and GMC, even for simple illnesses.
He said the government is looking to soon to start a programme for taking administration at doorsteps of citizens and
He also said, as announced by the government, Goans would get 16000 litres of water free. He said that the government is taking every step to make the state and its citizens Atmanirbhar in every aspect.
Health Minister Vishwajeet Rane said the government is committed to providing more and more health facilities to citizens.
He said Goa state spent almost Rs 1 lakh on covid patient treatment, which no other state had spent.
Art and Culture Minister said the project on PHC Bethki was delayed on account of the mutation process.
He said the PHC land was not in its name, and the foundation stone laid only after land is transferred in the name of Bethki PHC.