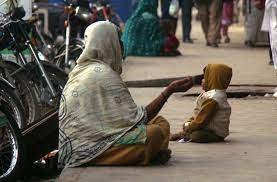 Goemkarponn desk
VASCO: Locals expressed displeasure over the increasing number of beggars in Port town. ARZ NGO feels there is a need for in-depth investigation, implementation of law and prevention related to begging and related crimes.
Arun Pandey, Co-founder of ARZ NGO from Vasco, said that their NGO is mainly working in the field of human trafficking, and their NGO has also done studies about the begging.
“There are three categories wherein begging takes place; first, if a person is poor and is mentally or physically disabled or for survival. Second, the category is if a person wants to earn easy money and if he is an alcoholic. The third category is if a person is being trafficked and forced into begging whose kingpins are sitting in Karnataka,” he said.
He further said that the Juvenile Justice Act and Goa Children’s Act are present in Goa, under which if someone is forcing minors into begging could be arrested, and the child could be sent to a protective care shelter.
He further mentioned that there is an increase in the number of beggars on the streets of Vasco, which makes them vulnerable to various abuses. There is a need to have CCTV cameras in various locations to trace various abuses and exploitation.
“It is good that Vasco police cracked kidnapping case of a minor child. There is a need for a thorough investigation into the reasons behind beggars and the prevention of such crimes. Rescuing minors who are into begging needs to be done and the adults who are habitual beggars need to be punished as per law,” he said.
Preetam Queloscar, a local, also expressed his worry about the beggar menace and the recent increase in crime in Port town. He urged authorities to take up this issue seriously as it tends to show Goa in a terrible light.
Vinod Kinlekar, MMC councillor, also said that several groups of beggars are found outside temples, railway stations, and outside eateries. There is a need to investigate where these beggars are coming to Vasco and creating a nuisance by dirtying public places. He urged govt to look into the matter.