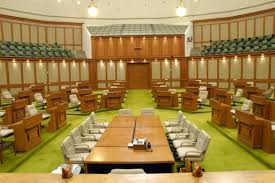 Porvorim: The four-day session of the Goa legislative Assembly begins tomorrow with the Opposition parties gearing up to corner the government on the burning issues.

The Opposition parties – Congress, MGP, Goa Forward, independents – Rohan Khaunte and Prasad Gaonkar have indicated that they will put government on the mat over issues of Coal, three linear projects in Mollem, Mhadei and mining.

Besides this the Opposition is also likely to target govenrment on police lathi charge at Melauli on January 6.

The four day session will have Governor’s speech on Day one while other businesses will be conducted from January 27.

Total 10 bills, 6 of which are government bills will be tabled in the 4-day state legislative assembly commencing from Monday, Jan 25.

Five private resolutions will also come before the house. Legislators have asked 751 Legislative Assembly Questions(LAQ) of which 195 are starred and 556 are unstarred, informed Goa Assembly Speaker Rajesh Patnekar.

He further said that the budget session of the state assembly is likely in March, 2021.