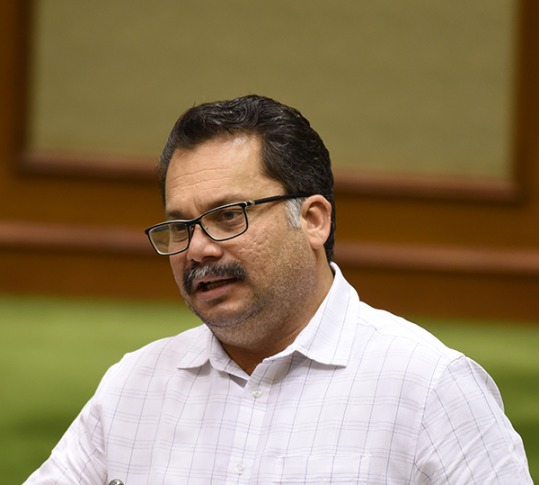 *Will find mechanism so that work across state is not hampered: Min Cabral

“We are facing at least 50 percent shortage in staff and we are now maintaining the existing staff but I know how difficult it is to work with less staff; somehow we are managing with less staff and the work of the department,” said PWD Minister Nilesh Cabral

Cabral said that he will find a mechanism so that work across the state is not hampered.We know how the work is currently going on in the PWD department.

“How much can one staff work and cater to an area, it becomed difficult and time consuming; PWD engineers have to be phsycially present at the site, how will one engineer manage these things,” he added

Cabral said that Chief Secretary has got the charge of Secretary PWD and the files sometimes may get delayed.

“I will speak to Chief Minister in this regards and if necessary will change the secretary,” he added

The minister said that potholes on roads during rains is a normal phenomenon and that the Jet Patcher machine has been repairing the roads.

He said that these machines will work for North and South Goa. “We want to put in a mechanism, there will be an app in such a way that people will post the photos of potholes, that will reach the contractor and within 98 hours, he will start working on it. It is a little complicated, but I am trying to do it. If it fails, then I will fail,” Cabral said.

He said that the government will not buy the machines but the contractor will take care of the financial part.

Cabral said that there are many difficulties to achieve the goal of 100 per cent pothole-free state, but he is trying for that.

“This jetpatcher machine can suck the water from potholes and repair the potholes. But it is not possible if there is heavy rain. We are starting this (technology) on a trial basis,” he said, adding that he is of the opinion that roads should be pothole-free.

Cabral made it clear that during his tenure as PWD Minister, there will be accountability for every work that is done.

“A lot of unwanted things have happened during the tenures of previous ministers, but I will march forward with good work,” said Cabral.

Cabral said his departments are facing staff shortage and it will take time to streamline the department.