AAP alleges CM, Zantye chased out of meeting in Mayem 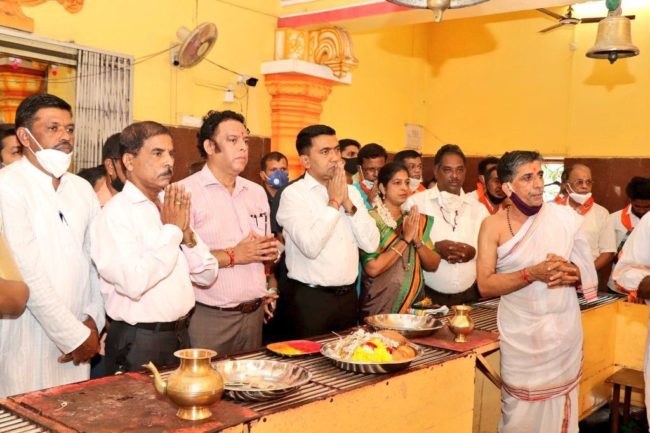 Goemkarponn desk
MAYEM: Aam Aadmi Party said that Chief Minister Pramod Sawant’s active campaign mode was disrupted by a rude shock in the village of Mavlinge, Maem where he and his MLA Pravin Zantye were heckled by villagers and forced to leave the venue of the meeting.
Villagers were unhappy that the Govt and BJP had not helped them in their time of need and were once again canvassing. Villagers highlighted that the BJP MLA Zantye had been missing ever since he got elected and in stereotypical style had now turned up just months before the elections, AAP said.
Residents of Mavlinge were seen angrily shouting at the CM and the MLA in media reports with one resident having to be calmed down by a police officer. Resident after resident angrily stated that the BJP seemed only interested in Mavlinge once elections drew close while being missing in action for the remaining part of the 5 years. The greatest anger of residents was reserved for Incumbent MLA Pravin Zantye who was accused of being inaccessible and infact being missing since the past 5 years. The CM and Zantye had to flee the area as villagers heckled them and shouted at them to leave the location. Once they left the villagers were seen to raise cries of victory.
North Goa, once considered a bastion of the BJP is proving to be full of pitfalls for the party as 5 years of misgovernance come to the front. Recently witness to some of the worst effects of floods, and home to miners who have been out of work for many years, it seems like residents have had enough of jumla after jumla from the Sawant Sarkar. It seems the residents of Mayem are not buying the CM’s jumla of a 200 crore investment in the constiruency. Apart from Maem the BJP is facing severe infighting in Mandrem as well where party workers and leaders held separate public meetings on the day the CM himself was in the constituency. BJP has lost both support of it’s cadre and it’s voters as well Goenkars at large.
“The BJP has learnt that they can’t fool Goenkars anymore! All their jumlas are to no avail. In Mayem and neighboring areas Goenkars are asking where are the jobs and where was the govt when they needed support during the pandemic” said Rahul Mhambre AAP Goa Convenor. “It’s about time Pramod Sawant read the writing on the wall. His govt is a huge failure” said Mhambre