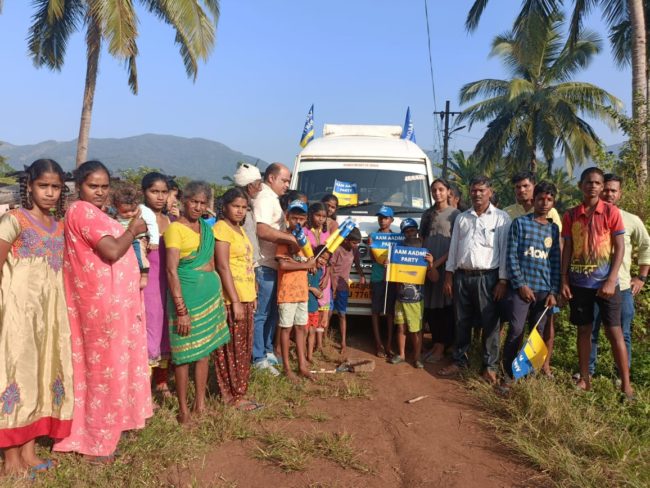 Goemkarponn desk
SANGUEM: Kumari villagers of Sanguem’ welcomed and overwhelmed with the start of free bus service in their village by the Aam Aadmi Party after a decade under the leadership of AAP leader of Sanguem Abhijit Desai.
Villagers have upheld this initiative by the AAP towards the social cause. Kumari village for the past many years has had no bus service for the people and due to this local village students also suffered greatly.
This Monday onwards, the Aam Aadmi Party started a free bus service for the students of Kumari, Bhati, Valshe and Vilien villages located remotely in Sanguem taluka.
These villages don’t have government bus services, especially for schools and colleges.
In Kumari, students who go to school have to walk 5 kilometres to reach the school, which takes around 2 to 3 hours, informed villagers. Due to the lack of tarred roads, no buses are plying from these areas.
The village population is around 300 people, and out of them, around 35 are students who are going to school. The students per day almost travel 10 kilometres too and fro, and they face lots of hardships for many years. Locals from these remote areas felt cheated because many MLA who got elected promised them to give good facilities and solve their problems, but on the ground, nothing happened. The villagers continued to stay deprived of basic amenities such as proper roads, electricity, water supply, public transport and connectivity like other areas of Goa.
The villagers were very emotional after the first bus service in Kumari village by the Aam Aadmi Party under the leadership of Abhijit Desai was commenced. While expressing their view about tough experiences of the past, locals got emotional and further said that their livelihood depends on dairy farming. If all goes well, it will help them feed their family and provide children with good facilities.
Later, Abhijit Desai, who took the initiative, said that this is an important necessity of life and giving such transport facilities to these villagers in the 21 st century is more crucial because the government claims that they have already given them.
Today we started free transport services for around 35 students, and if I get elected in assembly elections, I will provide government transport to these students and villagers, and even if I get defeated, I will continue my work for the betterment of these people.

PANJIM: Sixteen UK passengers passengers who arrived in Goa have been tested positive to Covid so far. Over 400 passengers, out of 900, arrived from ... Read More

Goemkarponn Desk PANAJI: The Mangaluru City police arrested an Omani national and another person for alleged illegal possession of cannabis and MDMA at a hotel ... Read More