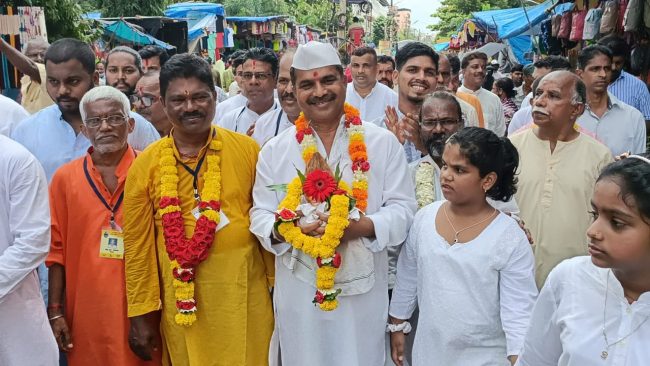 Goemkarponn desk
VASCO: The religious rituals of the Akhand Damodar Bhajani Saptah concluded on Thursday afternoon with the conducting of “Samapti” rituals and immersion of the Coconut (Shreefal, also known as Kaul) anointed the previous year at the feet of Lord Damodar in the Arabian Sea.
Thousands of devotees from across Goa arrived at the temple premises to participate in the Samapti on Thursday afternoon.
As per traditional rituals, the commencement of the Saptah Festival begins with the placement of Shreefal by the members of the Joshi family, and the Samapti ritual begins with the immersion of the previous year’s Kaul by the Narvekar family for several years.
At around 12.30 pm on Thursday, a huge crowd of devotees along with Damodar Narvekar began the process of the Samapti wherein, a huge procession performing the Dindi was seen moving towards the Kharewado beach where the previous Kaul was immersed in the Sea to mark the conclusion of Damodar Bhajani Saptah which witnesses 24 hours non stop Bhajan Performances by different groups.
The Dindi procession danced with slogans of ” Gyanba Tukaram”, and Dindi Pathak stopped at the Railway station circle to perform a Bhajan.
The final bhajan was sung at the Kahrewado jetty before the previous year Kaul was finally immersed in the Sea.
The fishermen’s community in Kharewado usually stand on a high vigil during the immersion to avoid any untoward situations and distribute bottles of packaged water to the people as a gesture of inter-religion bonding and harmony.
After the immersion was done, the prasad, usually consisting of fruits, was distributed amongst everyone and the procession moved back to the temple singing “Gopal Kala, God zala, Gopalane God Kela, Amcha Vithobha ghara shi aala.”
The traffic police deployed along the route back to the temple ensured that traffic was monitored and there was no hindrance caused to the procession returning back to the temple.
The Samapti ritual concluded when the procession entered the temple premises and danced in a circular pattern around the people singing Bhajans in the temple.
The final Pooja of Lord Damodar was performed, and Prasad was distributed to all the people in the temple.
This marked the conclusion of the 24 hours Akhand Damodar Bhajani Saptah.
The temple will, however, be open for all the devotees who have come from far and wide to receive the blessing of the Lord Damodar.
The make-shift stalls offering clothes, sweets and traditional furniture will remain around the temple premises for the next seven days and attract hoards of visitors and devotees from across Goa
Speaking to the media, Damodar Narvekar said that their family had the privilege to carry out the immersion of Kaul and Samapti rituals ever since the start of Saptah.
“This year, we are carrying out the Samapti on a grand scale, and this could not be done in the last two years amidst the pandemic. This year since there is a huge crowd for the Dindi, we have restricted the entry of all the participants into the temple, and only a few will perform the final rituals since the temple hall is small and may not be able to accommodate all the devotees at one go. Part of the procession will perform the final Dindi outside the temple,” said Narvekar.