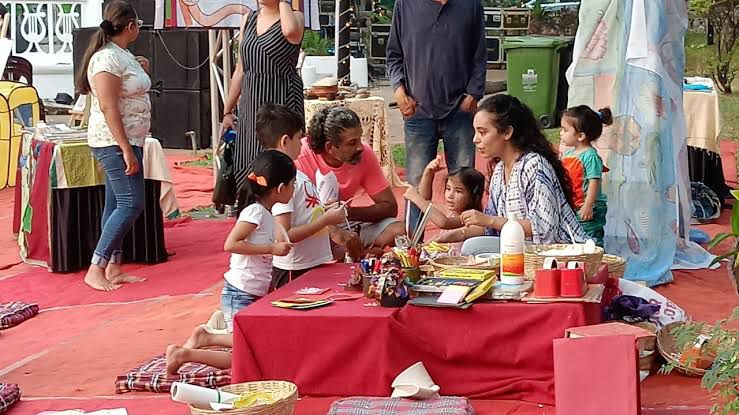 Goemkarponn desk
PANAJI: Citizens of all ages and from all walks of life engaged with the science and art of Goa’s ecological heritage at the Amche Mollem stall at the Goa Heritage Festival at Campal, Panaji.
The main exhibit of the Amche Mollem was a public table that welcomed people to sit down and learn about Mollem, the biodiversity of Goa and the trajectory of the Amche Mollem campaign.
Children as young as four came drew, and coloured in artwork from the campaign at the stall’s reading room. At the same time, adults looked through campaign publications about Mollem National Park, biodiversity and citizenship.
As they sat on this picnic table, they were also happy to have a space to learn about what an
Environmental Impact Assessment is the science around forest fragmentation and its implications.
Shashank Srinivasan, founder of Tech for Wildlife, appreciated this open approach saying, “As a scientist, it is exciting for me to see how art is being used to communicate science with people. I am happy
to see young, vibrant people taking on the difficult task of communicating complex science in a way that the layperson can relate to.”
Aparajita Datta, the scientist from Nature Conservation Foundation, echoed this sentiment, saying that the
artists, researchers and young people coming together to talk about and protect the state’s natural heritage are doing vital and inspirational work.
The public also supported the campaign by signing submissions to the WII against the new
proposed EIA for double-tracking the railway. Architect Lester Silveira from The Balcao and Goa Collective, who attended the festival and has led efforts to depict the Heritage at Risk, will send a submission to the WII Director on behalf of planning experts.
He said, “we have got many architects and planners onboard and aware from all across India of the irreplaceable damage and unviability of the railway double tracking project. Wildlife Institute of India and the Goa government must pay heed”.
The presence of the Amche Mollem campaign at the festival asserted the idea that Goa’s forests and its ecosystems are an essential part of the state’s heritage. It also allowed people to maintain their role as active citizens in protecting their heritage.