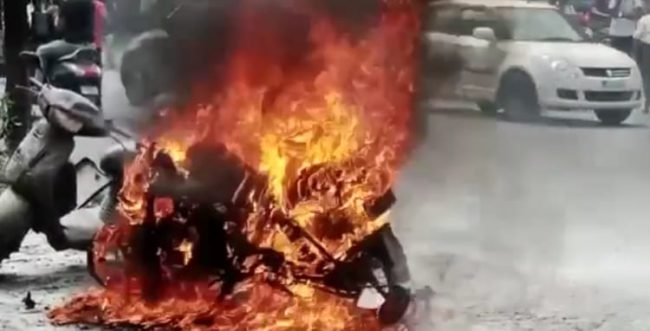 Goemkarponn desk
VASCO: A bike suddenly caught fire in the middle of Vasco city near a restaurant and two fuel stations. Locals managed to extinguish the fire, and a major disaster was averted.
In a shocking incident in Vasco city, a bike caught fire suddenly. The bike rider was shocked and stunned due to this incident.
Speaking to the media, the bike rider said that he filled the fuel in his bike from the nearest fuel station from Vasco, and afterwards, he withdrew money from the ATM machine. He then noticed a slight smoke coming from the bike. The rider then moved his bike ahead, and the bike suddenly caught fire. The bike rider said he was stunned witnessing this and could not do anything.
Former MMC chairperson Nandadeep Raut said that the major disaster in the making was averted as this fire incident occurred near two fuel stations in the busy area. There is a restaurant nearby where the bike caught fire. If the other parked bikes had caught fire, it would have been difficult to prevent the fire from spreading.
Raut also said that when people tried calling the Fire station in Vasco, the landline number of the fire station was out of order. I demand that the Fire station should troubleshoot the issues of their landline number, or they should provide a helpline mobile number to the people so that they could call the Fire station in an emergency.
He also demanded that a Fire station should keep one fire tender stationed in the Vasco town so that in case of the fire incident, this fire tender would play an important role in extinguishing the fire.