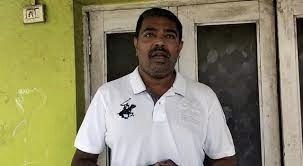 PANAJI: On Monday Tuesday, the Congress candidate for Mormugao Sankalp Amonkar alleged that BJP is government machinery against him and harassing him by summoning him to crime branch over the issue of ‘Sex Scandal’ by BJP MLA Milind Naik.
Amonkar was summoned to the crime branch on Tuesday and was later taken to the women’s police station in Panaji to take possession of mobile phones handed over to the latter by the former.
He said that police are harassing him over a complaint lodged by one lady against him. “This lady had complained in Bihar, which was transferred to Mormugao police station and later to the Crime Branch. Police filed an FIR against me but have failed to register a case against Milind Naik in a complaint filed by me at the women’s police station 35 days ago.” Amonkar pointed out.
“I am not afraid of pressure tactics by the BJP. Let them even arrest me, I will still fight for truth, and I am confident that truth will prevail as I have all the evidence against Milind Naik. We are soon approaching the court with all documents we possess.” He said.
He expressed surprise over the act of the crime branch to take possession of mobile sets from the women police station, which were handed over by him to investigate the case against Milind Naik.
“Now, I don’t know whether the police have tampered with the data from these mobiles. Even if they do so, we have multiple copies of it.” He said.
“BJP is trying to protect Milind Naik and hence hatching conspiracy against me. Why does Milind Naik resign as minister if he was not involved in this sex scandal.” Amonkar questioned.