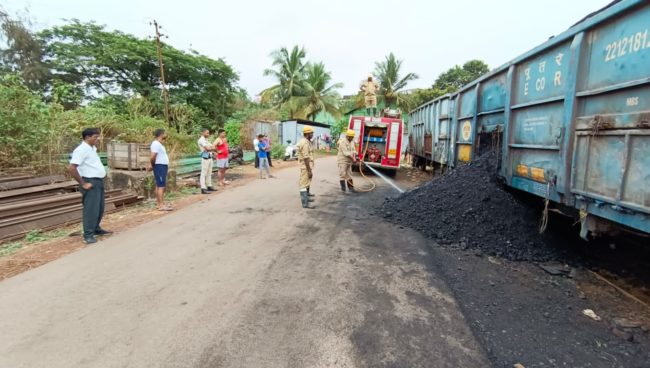 VASCO: A black smoke coming from a parked railway wagon at the Railway yard grabs the people’s attention. The fire station officer sprinkles water on the coal.
On Thursday morning at around 10.45 am, Vasco Fire station received a call citing that black smoke was coming from the railway wagon parked at the Railway yard in Vasco. After receiving the Distress call, Firefighters with their fire tender rushed to the site and noticed that dark smoke was coming from the wagon.
When contacted by Vasco Railway station master Ramdas Guddemani, he said that he got information stating that smoke is emerging from a parked wagon loaded with coal. We
informed the Fire station, and now they have managed to doze off the smoke.
A firefighter from the Vasco fire station informed that after receiving a call, they immediately rushed to the site and noticed smoke from a coal-packed wagon was coming. The reason behind this smoke might be the overheating of coal. However, the exact reason has not been ascertained.
Further, he informed that one such incident had occurred a few days ago in the yard wherein a smoke was coming from a coal-loaded parked wagon.
Now we have opened the wagon and sprinkled water on the coal. There is no danger,” he added.

Getting parking space is a UPHILL TASK in Ponda City

Goemkarponn desk PONDA: Getting parking space is a difficult task in Ponda City due to limited parking spaces. Locals witnessed this during Chaturthi shopping and ... Read More

Goemkarponn desk VASCO: Mormugao Port Authority is also looking forward to handling green (Pharma) cargo in the Mormugao Port, and discussions in this regard are ... Read More

BJP Govt has no money to dispose of unclaimed bodies: Kamat

Goemkarponn desk Margao - Leader of Opposition Digambar Kamat said that It is horrific to know that the bankrupt BJP Government headed by Chief Minister ... Read More