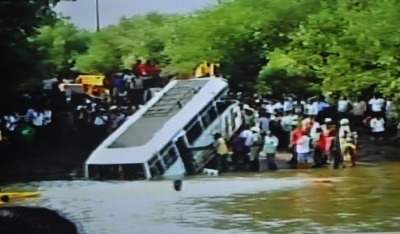 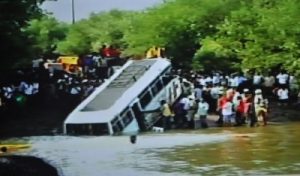 Goemkarponn desk
PANAJI: 10 years after the horrific Calvin bus tragedy, the Additional Sessions Court North Goa today has acquitted bus driver Rajesh Naik citing lack of evidence.
Advocate Damodar Dhond represented the accused, Rajesh Naik.
After examining the witnesses, the Court had ordered that the prosecution had failed to prove either that the accused drove the bus in a rash and negligent manner.
The bus carrying passengers to the ferry crossing between Aldona and Calvim village rolled down the ferry ramp into the river after the brakes failed.
The ferry was on the other side of the river.
Both the driver and the cleaner, however jumped out to safety, leaving the rest of the passengers, most of them schoolchildren aged 8 to 11, to fend for themselves.
The driver Rajesh Naik who also owned the bus, was arrested and booked for culpable homicide.
The Mapusa police filed a chargesheet before the Mapusa JMFC on January 17, 2013, against the bus owner and driver.
Then Chief Minister Manohar Parrikar had told the House that government would write to the Court seeking immediate justice for the victims’ families.