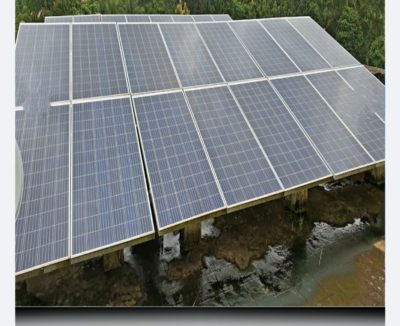 GAURANG PRABHU/ Goemkarponn
MARGAO: Camurlim village Panchayat in Curtorim constituency has been honoured for being the first solar-powered Panchayat. Besides, the Panchayat also has a distinction of carrying out various development works for the benefit of the people.
However, this Panchayat faces many technical problems due to the lack of government support, junior engineers and Secretary.
The Panchayat has become the first Panchayat to run on solar energy, and a total of 20 KV watts of electricity is being generated by the solar power project here.
The remaining 15 kV watts are being sold to the other department as the Panchayat requires only 5 kV watts for its usage.
The sale earns an annual income of Rs 70,000, and the funds are being used for panchayat work, said Camurlim Sarpanch Basilio Fernandes.
The Camurlim Panchayat has undertaken several public interest development works to inspire other panchayats, some of which have been completed, some of which have been tendered, and some have been sent to the concerned department for approval.
The Panchayat has provided library facilities for the students in the Panchayat area and provided a free WiFi facility to complete their educational projects properly.
Many free services like a gymnasium for the village’s youth, daycare for the elderly, three children’s parks for the children, etc., are provided by the Panchayat to the people, and the responsibility of maintenance is also being taken by the Panchayat.
Not only this, efforts are being made at the panchayat level to ensure that agricultural land does not remain fallow in Camurlim area.
The Camurlim Panchayat has also decided to conserve water to permanently improve the area’s water table and save land and other natural resources.
The water conservation project at Ujro-Camurlim, which was shut down, will be revived by the Panchayat, for which a fund of Rs 1 crore 84 lakh has been sanctioned so far Basilio said.
He said that in the future, the water will be used for fisheries as well as agriculture. This water conservation system will be helpful for farmers to cultivate in both seasons, said Sarpanch Basilio Fernandes.
He said that various initiatives are being implemented in the panchayat area to control waste, and this initiative is also getting support from the citizens.
However, the Panchayat is collecting wet and dry waste from people’s homes and processing the wet waste in a waste processing plant to produce biogas.
He also said that the Panchayat is trying to start a plastic waste processing project to convert plastics into blocks by processing plastics.
The condition of roads in Goa as a whole is deteriorating. However, the roads in Camurlim area are in good condition except for a few places on the national highway.
Asphalt work will be undertaken due to potholes in some places on the internal road in Camurlim area, Basilo said. He also said that Rs 4 lakh has been sanctioned for cleaning nallas from Jhariwada to the main state highway.
Due to the sudden stoppage of funds given to the Panchayat, the Panchayat has to work hard. Sarpanch Basilo Fernandes said that all the transactions of the Panchayat depend on the house tax received from the people and the money earned from the sale of solar energy.
Since the Panchayat does not have a junior engineer, the Panchayat has to face many problems.
Sarpanch Basilo said that the Panchayat has been given a technical department, but the Panchayat is facing problems as it only needs engineers to carry out specific tasks.
As the Panchayat does not have its own secretary, many functions of the Panchayat are stalled, and the sarpanch has demanded that the government give a full secretary to the Panchayat.

Goemkarponn desk PANAJI: Chief Minister Pramod Sawant has requested all the political parties in the state to follow all the restrictions put forth by the ... Read More

NEWER POSTMulti-cornered fight in Sanguem
OLDER POSTBollywood has no issues with smoking, gutka, drugs, gambling; but feels one-day fireworks are going to finish the world?