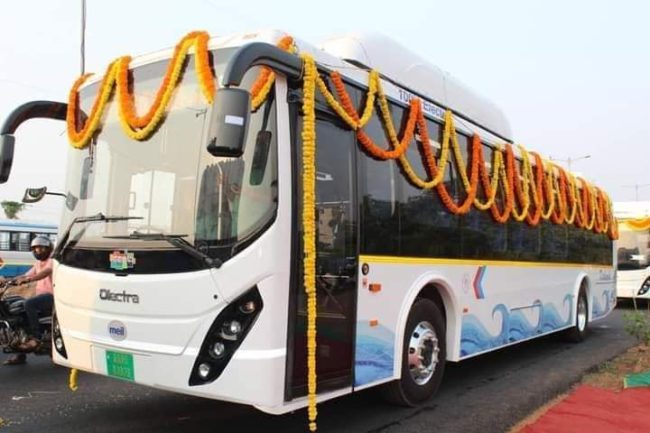 Canacona: It was a news from the blues for Canaconkars as the Margao-Karwar route was opened for electric buses and now the commuters from here are all set to travel world class whenever they have a trip planned to the commercial capital of Goa.
Newly elected councillors Shubam Komarpant, Dhiraj Naikgaonkar and Hemant Naikgaonkar on being informed that the KTC has started plying electric buses on Margao-Karwar route they welcomed the bus and its driver and conductor to congratulate them and later Garlanded the bus.
Sources informed that these E-buses are air conditioned and are 12-metre-long, have a seating capacity of 48 plus driver and are fitted with electronically controlled air suspension in the front and the rear.

They are also equipped with CCTV cameras and a hydraulic wheel chair ramp for the differently-abled and elderly.
On the technical side, the buses have disc brakes, Anti-lock Braking System (ABS), GPS tracker, emergency button, USB sockets and other facilities.
These buses which comes attached with lithium-ion (Li-ion) battery pack allows the buses to travel 200 to 250 km on a single charge and needs four hours to charge from zero to 100 percent.
These buses are also equipped with a regenerative braking system, allowing them to recover part of the kinetic energy lost by braking sources informed.
Equally delighted were locals from Karwar and surrounding areas as most of the natives of Karwar have to travel to Goa for different reasons ranging from employment to medical attention and this is going to be a great experience to them.
Many internet savvy denizens of Karwar posted pictures of the E-bus at KSRTC bus stand at Karwar and attached happy emojis and comments there on.