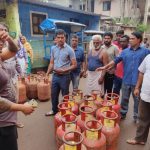 SANCOALE: There was utter chaos in Sancoale on Monday morning after a large number of residents confronted the staff of the Gas Cylinder supply company over shortage of Gas in cylinders.

Even as the crowd began increasing, the driver and the cleaner along with the loaders fled from the site after abandoning the vehicle at the spot.

The incident happened when one of the resident sensed that the gas cylinder was light and raised an alarm leading to other residents deciding to check for the weight using a scale available .
Later as people gathered to check all the cylinders in the truck , the workers who sensed the anger amongst the residents decided to flee from the spot.

The residents later alerted the legal Metrology department who rushed to the site and began investigation by checking the weight of the cylinders .

The legal Metrology led by Nitin Purushan said that the department had attached 13 cylinders and said that some cylinders had been underweight to the tune of upto 3.2 kgs.

“We randomly checked an realised that many cylinders are underweight and we have now requested the authorities to thoroughly investigate the incident and take necessary action. Some of the cylinders have opened seals and we decided to get things sorted after unitedly deciding to act on the underweight of the cylinders. ” Said the resident