Coastal plan should be mirror of ground reality, not of Google Research: Congress 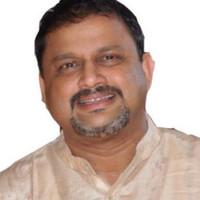 PANAJIM: Citing an example that an unfinished bridge in Benalulim has been shown as sluice gate in Coastal Zone Management Plan (CZMP), the Goa Pradesh Congress Committee on Monday alleged that this plan has been done with ‘google research’ and hence should be kept in abeyance by directing the agency to visit all villages for ‘ground research’.

Congress has said that ‘ground research’ should be a mirror of CZMP and has demanded with the government that CZMP prepared by the National Centre for Sustainable Coastal Management (NCSCM), from Chennai should be asked to visit all villages to make it correct.

GPCC Spokesperson Tulio Dsouza on Monday addressed a press conference and alleged that BJP is trying to sell Goa to crony capitalist friends of Modi.

“Two crores fees has been paid to this NCSCM, hence the work should be done correctly by coming into villages and not on google.” He said.

Tulio Dsouza said that there is no clarification in regards to keeping the CZMP open. “Why the government brought the duration of keeping the plan open for 30 days from 60 days.” He questioned.

Tulio Dsouza said that the government has failed to pay heed to demands of people and even to listen to the voices of people. “Government is trying to wrap up the issue by holding a public hearing, so it can go ahead with the same plan.” He said.

“why government pushing this plan so hurriedly? Are there any hidden agenda to sell ports of Goa to capitalist friends of Modi.” He questioned and added that there are 14 protected monuments in Old Goa, but only one is reflecting in this plan.

He said that people are protesting because their houses, bundhs and other structures are not shown in the draft plan.

He said that plan should have been discussed at the panchayat level. “ Traditional fishermen rights, and rights of other stakeholders have not been considered.” He said.

He also said that the suggestions made by the panchayats do not reflect in the draft.

Royala Fernandes said that unfinished bridge in her village Benaulim has been shown as sluice gate, which has been done by using google map.

“This draft should be made in local languages, so the villagers understand it properly.” She said.

She said that illegal structures are shown in the plan, to benefit some people, however interest of traditional fisherman, shack owners and water sports is not protected.

Swati Kerkar said that public prticipation is important in this matter and hence the government should direct agency to visit villages.