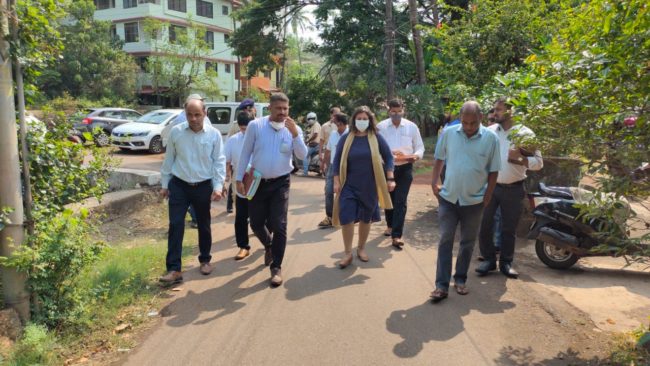 VASCO: Site inspection was undertaken by the South Goa Collector and Vasco MLA of the Voddant slope prone to landslide. Remedial measures will be taken after obtaining the land owners’ permission to avoid landslides during Monsoon.
The inspection was carried out by the South Goa Collector Ruchika Katyal along with the Vasco MLA Krishna’Daji’Salkar and others to see the ground reality of the Voddant slope, which is prone to landslides.
After the inspection, South Goa Collector Ruchika Katyal told the media that the inspection was done, and the residents were asked to get permission from the landowners to implement remedial measures such as the construction of a retaining wall or flattening of the slope to avoid boulders from sliding or to avoid landslide during Monsoon.
She further said that the technical engineers of the concerned departments will decide on the remedy during the meeting and will implement it.
Vasco MLA Krishna’Daji’Salkar said that six months back, this matter was pursued, and some families have received the compensation of Rs.4 lakh under disaster management, and one more person will soon going to get compensation.
Salkar added that he met the Chief Minister and put forth this issue. Chief Minister then directed South Goa Collector to immediately undertake a site inspection. The Monsoon is a month away, and we will try to take steps to prevent landslides or damage to the houses underneath.
A local woman whose relative(an old lady) had died after a boulder came sliding down on their house two years back, and the old lady died in the house. During that time, there was a strong demand for the construction of a retaining wall, but after two years of that incident, once again, the demand for the safety of the people from Voddant has come up.

PANAJI:The Union Health Ministry has prepared a fact-sheet to guide front line workers and vaccinators on counselling pregnant women about the value and precautions of ... Read More