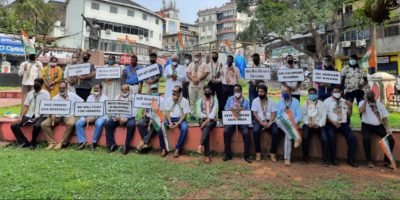 The protests were organised as nationwide campaign of Congress Party to oppose anti-farmers laws and policies of BJP Government.

Congress Party created projects like Railways, Telecommunications, Roadways after Independence and worked hard to develop connectivity all across the country. It is during Congress regime that ” Green Revolution” and “White Revolution” took place which boosted the agriculture sector and energised the farmers said GPCC Vice President M K Shaikh.

The oldest ally of BJP from Punjab Akali Dal has now resigned from NDA protesting against the new Farm Law. The BJP needs to introspect on the same and learn lessons said Congress Vice President Altino Gomes.

GPCC General Secretary Subhash Faldessai said that Congress party is committed to fight for the rights of poor and common man and will fight more aggressively in the days ahead to bring justice to the people.