Corporate bodies must take up public works under CSR in Mormugao: Amonkar 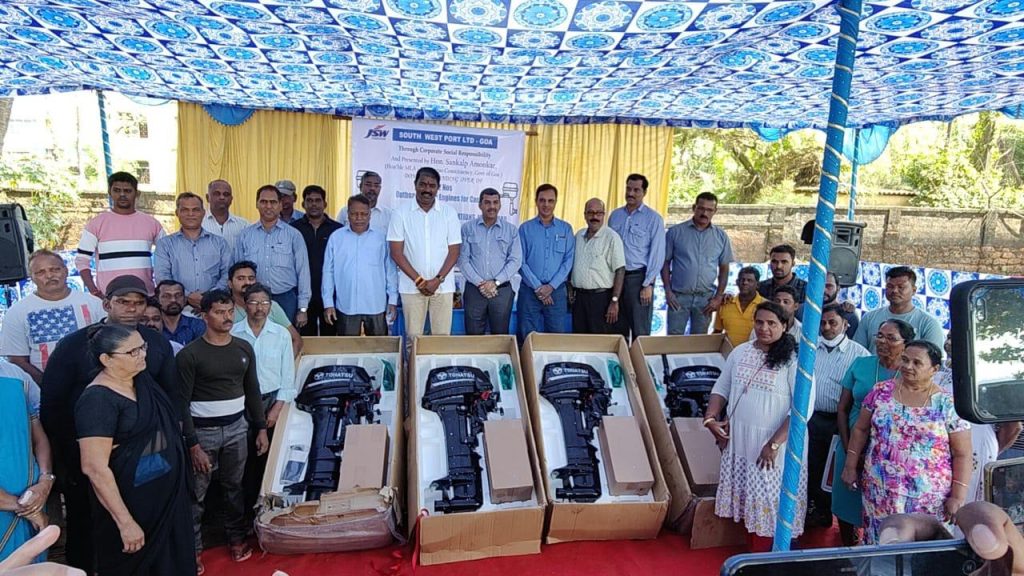 Goemkarponn desk
VASCO: Mormugao MLA Sankalp Amonkar on Saturday morning said that all corporate bodies must come forward and carry out beneficial public works through CSR in Mormugao.
Amonkar was speaking to reporters after the distribution of 32 engine motors to Desterro Fishermen through CSR by JSW company.
“This was a long pending issue of the fishermen association, and though JSW foundation, who had taken the initiative of distributing these motors, had kept it pending for some reasons. After around two years, we got in touch with the company, spoke to the authorities, and got these 32 motors distribution,” Amonkar says.
He said the Fishermen are struggling, and sometimes they return empty-handed and face losses and buying new motors is not possible.
“The CSR activity has secured the future of the fishermen, and other companies operating in Mormugao Taluka must emulate this and carry out CSR activities for the benefit of the public,” said Amonkar.
“We want other companies to utilise their CSR funds to carry out beneficial public projects, and I will ensure that these companies who are not utilising these CSR funds start taking beneficial public projects in Mormugao Taluka. JSW is the only company that is carrying out a lot of activities, and they have developed parks, put water filters, helped Anganwadi and also launched a vehicle for Swacch Bharat Abhiyan in Vasco. I have told them to have another vehicle for Mormugao Taluka.” said Amonkar.
He said he has approached all the companies operating in Mormugao and told them to carry out CSR activities and also given them a time frame, and if they don’t start doing CSR activities in the next 6 months, we will take another future course of action.
“I have also spoken to the MPA, but their business activity has decreased after the mining ban, and we will take a follow-up, and they have agreed to have a particular budget that will be utilised under CSR for the public,” said Amonkar.
Capt Anurag Bhagauliwal, unit head and senior VP of the JSW, said that each motor was worth Rs 1.50 lakhs and that the total cost of the motors was worth rs 50 lakhs.
“We have been trying to.do this for a long time and happy to support the fishermen’s community. JSW foundation always has believed in sustainable community service, which will work for a long time,” he said.