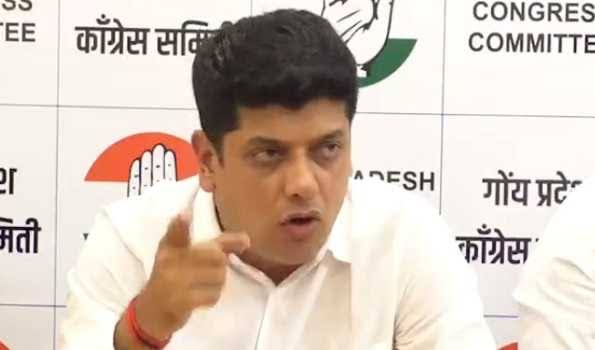 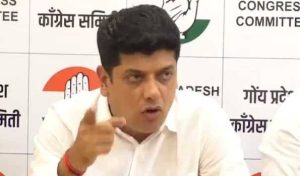 Goemkarponn desk
PANAJI: “It appears that even the Covid19 Virus now takes the permission of the BJP Government under Prime Minister Narendra Modi & spreads as per the political convenience of the BJP Government,” charged Congress President Amit Patkar.
Taking a potshot at the goof-up of Chief Minister Dr Pramod Sawant over the announcement of inaiguration of the new Zuari Bridge, Congress President termed BJP as opportunist & obsessed with events to make fortunes from “Mission Commission”.
“Frightened by the massive success of the Bharat Jodo Yatra of Our Leader Rahul Gandhi, Union Health Minister Mansukh Mandviya wrote a Letter to him asking to stop the Yatra citing COVID19. In sharp contrast, Chief Minister Dr Pramod Sawant is giving an open invitation to the public to come in large numbers for an event on the new Zuari Bridge,” stated Amit Patkar.
He said a Few days back, PWD Minister Nilesh Cabral left it to the Bridge Contractor when questioned by the Media on the Quality of the Bridge.
“Coming under pressure from BJP’s in-house Event Management Agency, Chief Minister has postponed the inauguration by three days, causing inconvenience to the public. Will Prime Minister Narendra Modi take note?” questioned Amit Patkar.
“There is nothing to celebrate. Let the new bridge pass the quality test. Goans are facing nightmares on the “Atal Setu”, which was inaugurated with similar “Josh” when the bridge was actually incomplete and remains incomplete,” pointed Amit Patkar.
He said the people of Goa suffered a lot during the Inauguration of Manohar International Airport. I appeal to the Goans not to risk their lives on the bridge as BJP’s obsession with making fortunes from event management will surely result in mismanagement and chaos at the inauguration function.
“I also condemn the statement of the Chief Minister that the celebrations are organised to “Gift” the bridge to Goans. The bridge is constructed from taxpayers’ money, and it is not BJP’s private property to gift to Goans,” Amit Patkar said.