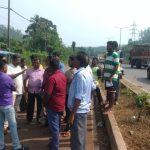 Locals strongly demanded that before closure of Median gap ,Demand two way service road from Copperwada to Amigoes Junction for safety of locals to proceed towards Ponda from their residence. The locals said the service road is six meter wide and two way possible only encroachment on it need to be cleared.

The locals said median gap is the only way to enter on Highway to proceed towards Ponda. The locals also said if median is closed than before that two lane service road up to Amigoes underpass should be provided to them.

The locals gathered to protest said that if the median gap is closed than acess for vehicles at Copperwada would be closed and they will have to cover two km away distance to come on Highway and proceed towards Ponda. They said they were earlier assured underpass while construction of NH however this assurance was not fulfilled.

However the officials are now misusing deputy Collector order and had came at Copperwada to close the median gap. Some people intention is to create fight among locals on median issue. Only one median is directed to close.

He said if two way service road is widened than the Copperwada locals would not face any problem to proceed towards Ponda from their residence.