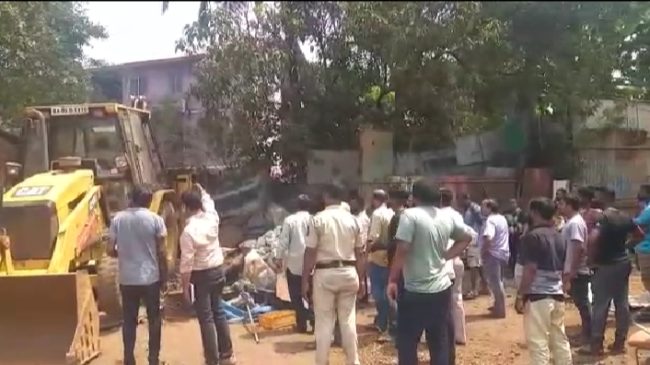 PONDA: One year after issuing the notice, the Curti-Khandepar Panchayat finally bulldozed the illegal scrapyard operating at Bazaarmol Curti and another at Amrai Colony today.
It is learnt that Panchayat will demolish eleven scrapyards illegally operating in Panchayat Jurisdiction.
According to locals, it has been operating for the past several years, causing a nuisance to locals.
One local Sandeep Pankar had filed a complaint in the year 2021 following which Panchayat body had conducted the inspection and based on it had issued a show-cause notice to the owner of scrapyard Basawraj Allaynavar on 2 March 2021 to produce documents of scrapyards, however as he failed to produce its body in its meeting held on 1 June 2021 had resolved to issue demolition orders.
Accordingly, he was directed to demolish it; however, as it failed, the Panchayat body finally demolished the illegal scrapyard.
According to complainant Sandeep Parkar, the scrapyard was operating near a residential area, further, it was burning waste scrap material which was posing risk to health as also there were chances of the spread of dengue due to empty barrels utensils at the scrapyard and therefore the complaint was filed against it.
According to locals government should provide space for scrapyards in Industrial areas as many of them dangerously operate in residential areas.