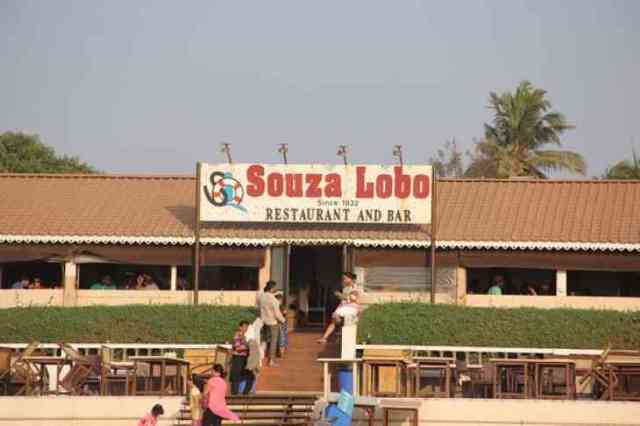 Goemkarponn desk
CALANGUTE: Days after the famous Curlies restaurant was razed, the Goa Coastal Zone Management Authority (GCZMA) has now turned its focus on the “iconic” Souza Lobo restaurant on Calangute beach.
On Tuesday, the GCZMA issued directions to demolish illegal constructions of the metal stage on the beach of approximately 80 sq meters illegally erected laterite masonry compound wall height.9 meters and length of nine meters, constructed along the eastern boundary of the plot, illegally placed stone pavers as a pathway on the beach in NDZ area in the property bearing Survey No 176/17 of Calangute Village.
The GCZMA says it had received a complaint from one Mrs Rama Rani Arora, resident of East Delhi, with respect to the illegal construction with regards to the metal stage on the beach and beach wall, illegally placed stone pavers in the above-said property carried out by Jude Lobo and his wife L Lobo, residents of Calangute Bardez Goa.
The GCZMA says it conducted an inspection through a field surveyor and engineer on 07/12,2021.
“Jude Lobo said during the inspection that illegalities were being carried out by Virendras Shirodkar of Reis Magos.
However, Virendra Shirodkar, in his reply, said he has no connection to the illegal construction,” GCZMA says.
Speaking to Geomkarponn, Jude Lobo said that it is shocking to know about the demolition notice.
“I had infact filed a complaint against Rajiv Arora for CRZ violation, but there is not even a show cause notice; forget demolition and today they send a demolition notice to local business,” he said.
The complaint is forged and has nothing to do with my survey no. The GCZMA team did not know the survey nos or the plans. They just came here without any documents to prove we were illegal, he said.
He alleged that the Minister in charge of GCZMA is taking bribes for such works.
“It’s all about money. There is no action against the Delhi businessman. There is not even shos cause, and local businesses are being troubled,” he said.
Explaining the issue further, he said that the survey not shown on the demolition order is of Souza Lobo, but there has been no inspection or notices to us.
“They directly came for demolition. I had received notice once but all with wrong survey numbers,” he said.
Lobo said that action has to be initiated against Rajiv Arora, but this government continues to trouble local businessman.