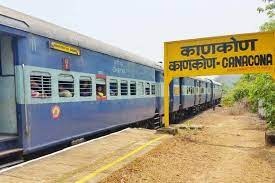 CANACONA: Alleging railway authorities are ignoring the rightful pleas of railway travellers. Canconcars are planning to march to the Konkan Railway Station, Canacona, to demand the immediate resumption of train Halts at Canacona Railway Station.

“We pleaded to the Railway and other authorities to halt Express Trains/Long Distance Trains at Canacona Railway Station to facilitate easy railway travel for Canaconcars, but our demands have so far fallen on deaf ears,” locals said.

They said the Railway authorities have shown scant or no respect for our representations of our feelings in state social posts on the failure of Railway Authorities to resume trains halts at Canacona KRC Station.

Incidentally, after various people under different platforms have represented to the railway authorities, including a Forum For Senior Citizens of Canacona, Swabhimani Jagruth Canconcars has now appealed, ‘It is time for all Canaconcars to come together and jointly march to Canacona Railway Station on Thursday, 15th Dec. 2022 at 10:30 am to awaken Railway authorities towards our plights and force them to halt Express/Long Distance Trains at Canacona Railway Station for the sake Canaconcars and visitors to Touristic locations’.

It may be recalled that since and during the Covid-19 lockdown period, KRC has altogether withdrawn train halts as part of Zera Based Time Table on Konkan railway, which included halts of Netravati Express, Magsyagandha Express and Gandhidham-Nagarcoil Express at Canacona KRC Station as per the Ministry of Railway’s directives, even after the Trains were resumed on the route.
Simultaneously, the Canacona Station train Ticket quota was also withdrawn, and of lately, even the Computerized Railway Reservation Centre functioning at Canacona Post Office has stopped functioning.

Initially, several residents pleaded for the resumption of halts including political parties, while in a one-off response to the pleas, KRC’s Mumbai Office, that halts for trains at any station is under the purview of the Railway Board.

According to sources, Swabhimani Jagruth Canconcars and Vission and Mission Progressive Canacona asking to ‘be part and voice of Canacona’ has appealed to the public ‘ Let’s come together and unitedly fight for Our Rights’, to lead a morcha on Canacona Railway Station on Thursday’.