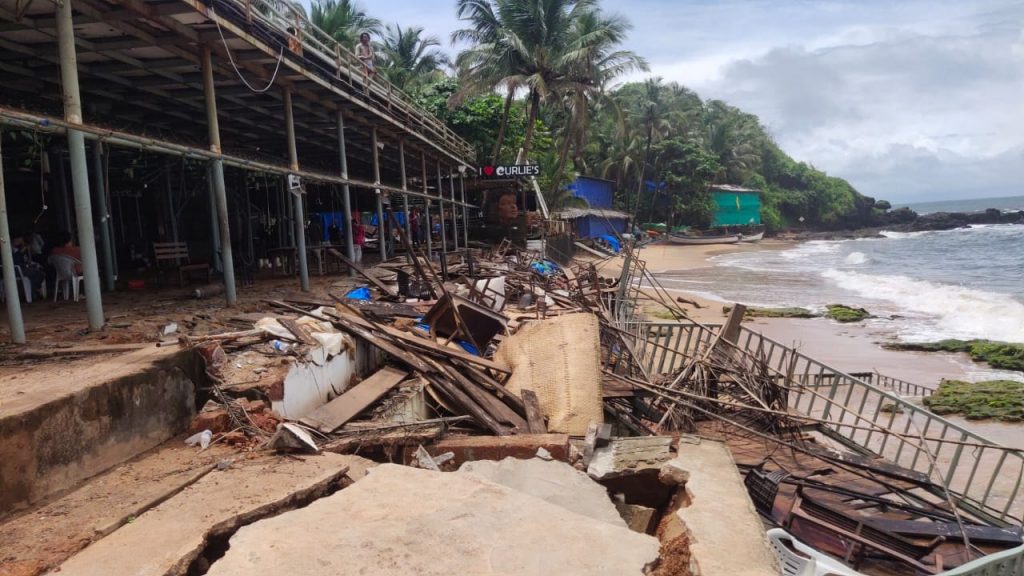 Goemkarponn desk
ANJUNA: It felt like a Bollywood flick story when the authorities had begun construction demolition, and suddenly a lawyer arrived with a stay order.
The demolition of the controversial shack Curlies on Anjuna Beach began this morning at & am after a late night order from the Deputy Collector.
However, the demolition of Goa’s ‘Curlies’ restaurant, which came under the spotlight after Haryana BJP leader Sonali Phogat’s death, was put on hold by Supreme Court, hours after the Goa government started the process to raze the structure.
However, the orders came after 30 per cent of the restaurant was demolished.
Again the authorities said the stay was only on one survey no 42/10.

Amidst the confusion, the authorities said that they are demarcating the survey no and the construction in the rest of the other survey nos could be demolished.
“Almost 75 per cent of the shack could be demolished,” sources said.
“We direct structures in existence in land other than survey no 42.10 are not being covered by this order. Resultantly, if there are unauthorised constructions in lands other than survey 42/10 then demolitions can go on,” the SC order said.
Meanwhile, the Apex court, however, directed the restaurant to suspend its commercial operations till a decision on a petition challenging its demolition was taken, setting September 16 as the next date of hearing.
The demolition action against the restaurant began after its owner failed to get any respite from the National Green Tribunal or NGT.
On Thursday, the NGT upheld the Goa Coastal Zone Management Authority’s previous order to demolish the shack for violating green rules.
Earlier in the day, there were heavy police outside the shack for its demolition.
The restaurant, located on Goa’s famous Anjuna beach, was in the news recently after Sonali Phogat was seen partying there hours before her death. Its owner Edwin Nunes was among four persons arrested in the death case. He was later granted bail.

The lawyer for Curlies Gajanan Korgaonkar said that he never heard authorities come for demolition at 7 am.
“We did not even get 24 hours after receiving the order at 1 pm yesterday,” he said.

NGT Order…
The National Green Tribunal (NGT) has dismissed the petition filed by Linet Nunes against the GCZMA order for demolition of Curlies Beach Shack in Anjuna as it was found to be constructed illegally in the ‘No-development Zone’ in CRZ-III in violation of CRZ Notification, issued under the E.P. Act.
“We do not find any merit in the appeal, and there is no ground to interfere with the impugned order. Documents relied upon by the appellant at best show that NOC was granted by the Panchayat in respect of some construction in Survey No.42/10. House tax receipts also show the same. These are the
basis of the earlier enquiry report and report of SDM. The same was rejected, and the fresh report was submitted for the reasons noted above,” the NGT said.
“Question is whether structures now found are the same which existed prior to 1991 in respect of which NOC was given by Panchayat, or house tax receipts were issued. The answer is ‘no’. The nature of the structure at present is a permanent construction, beyond the original temporary construction limited to Survey No. 42/10. Present constructions extend to Survey No. 42/9, 11, 45/19, 45/41. Though learned senior counsel submits that only structure in Survey No. 42/10 belongs to the appellant
and other structures do not belong to the appellant. The fact remains that
all the constructions are found to be occupied by the appellant. Even construction in survey no. 42/10 is not pre-1991. Fresh construction has been raised in replacement of the original one for commercial purposes, without requisite permission, in no development zone,” NGT said
With this, the Environment & Forests, the Government of India, and the GCZMA have directed the closure of all commercial activity in the form of Night clubs, Bar & restaurants being run by Edwin Nunes and Linet Nunes.
Also, the Commissioner of Excise Department has been directed to withdraw the Excise license granted to Edwin Nunes and Linet Nunes for sale and consumption of liquor in the Curlies Night Club, Bar & Restaurant within 30 days while also directing the Chief Electrical to disconnect the power supply connection to the said structure.
While Village Panchayat of Anjuna has been urged to withdraw the Trade License to the activity carried out in the said structure and further ensure its compliance.
During the inspection, it was found that illegal constructions of permanent nature were in violation of CRZ Notification, 2011. GCZMA accepted the report and held that the structures in existence were not of temporary nature and were constructed post-2003, and the same was not reflected in the Google image of 2003. A plea that the structures in question existed prior to 1991 was rejected.
“The Google images of 2003 also do not show any structure in the said property existing in 2003. Therefore, it is apparent that said structure is new and has been constructed in violation of CRZ Notification right on the High Tide Line of the sea,” the NGT order states
Order for a second inspection was passed after considering the application inter alia, submitting that in the year 2004, the earlier structure was demolished on directions of the High Court. The appellant raised fresh constructions. As per the re-survey carried out by the GCZMA on directions of the Bombay High Court in W.P. No. 422/1998, no structure was found in existence in 2008.
The restaurant on Goa’s famous Anjuna beach, where Haryana BJP leader Sonali Phogat had visited before coming back to her hotel and complaining of uneasiness, was in the limelight 14 years ago when a British teenager had died. Sonali Phogat (42) had visited ‘Curlies’ restaurant on Monday night and was brought dead to the St Anthony Hospital in Anjuna in North Goa district from her hotel on August 23 morning.