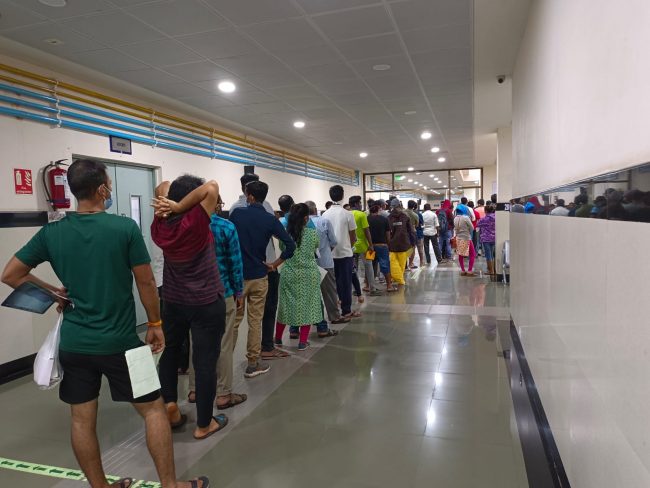 Goemkarponn desk
CHICALIM: Dengue cases are less this year compared to last year. Malaria cases are nil, whereas Viral Fever cases are increasing, which comes to Chicalim hospital.
Dr Anil Umraskar, medical Superintendent at Sub District hospital Chicalim, said this year, from June and July till 11th, there were only 15 Dengue cases. Last year in June, Dengue cases were 115. Compared to last year, cases in June this year are considerably fewer.
But at this moment, we can’t predict what could be the scenario of Dengue cases as it may even increase in August.
When questioned about the long queue in the Sub District hospital Chicalim, Dr Umraskar said that these patients have come to treat viral fever. The Malaria cases are almost nil.
He said that of the patients visiting the hospital daily, 40 per cent of them are coming to treat viral fever. On average, we get 60 to 70 viral fever cases per day. We hope that viral fever cases will decrease by next month.
Meanwhile, Dr Umraskar also said they started the Operation Theatre (OT) two weeks ago. The Gynecologist doctor uses this facility to treat and see patients. The radiologist also comes once a week.
Before, there was a staff shortage, but now the issue has been sorted out, and we have enough staff, including the nurses, Dr Umraskar added.

Goemkarponn Desk Panaji: At the end of final day for filing nominations for the forthcoming municipal polls, there were total 381 nominations from six municipalities ... Read More

Goemkarponn desk SANCOALE: Girish Pillai was elected unopposed as sarpanch of the Sancoale panchayat on Tuesday . Speaking to reporters, Pillai said that his victory ... Read More