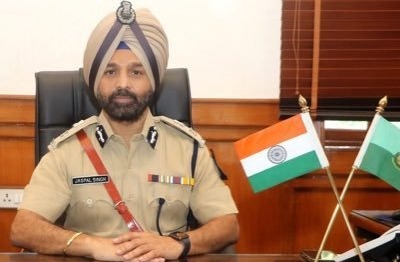 Goemkarponn desk
PANAJI: Director General of Police (DGP) Jaspal Singh IPS said that drugs come to Goa via bus and trains; hence not possible for permanent nakabandi at various locations.
A coordination meeting was held at Goa which was attended by police officials from Goa, Andhra Pradesh, Karnataka, Maharashtra, Telangana, Gujarat and Odisha to effectively deal with the menace of drugs.
The inter-state intelligence coordination meeting on narcotic drugs and other organised crimes discussed challenges and shared information on drug dealers, peddlers and all those involved in the drug trade.
“The meeting was held to effectively deal with drug peddlers, drug mafia and drug carriers and share information about criminals,” director general of police (DGP) Jaspal Singh told reporters after the meeting.
He further said that the States involved in the coordination meeting have shared a list of the arrested people.
“This list will be verified by other states to find out if they have accused of similar names and descriptions,” he informed.
DGP Singh said that drugs come to Goa through buses and trains, and hence it is not possible to have permanent nakabandi against drugs at these places, but random surprise checks are held.