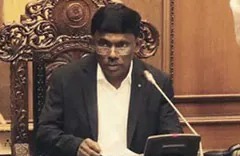 Goemkarponn desk
PORVORIM: The Goa Legislative Assembly Speaker Ramesh Tawadkar today has granted 30 days time to MLAs Digambar Kamat and Michael Lobo to reply to the discussion petition filed against them.
The petition has been filed by Goa Pradesh Congress Committee (GPCC) President Amit Patkar.
The first hearing on the petition was held today in the Speaker’s chamber.
The Speaker has granted a month’s time to the MLAs to respond to the petition, after which the petition will be heard.
MLAs Micheal Lobo and Digambar Kamat were not present for the hearing today.
The Congress leadership in the coastal state had alleged that its MLAs, Michael Lobo and Digambar Kamat, were trying to split the party in connivance with the ruling BJP.
The Congress back then had a total of 11 MLAs in the coastal state, of whom Michael Lobo, Digambar Kamat, Kedar Naik, Rajesh Faldesai and Delialah Lobo had gone incommunicado.
Congress’ state in-charge Dinesh Gundu Rao had said, “Lobo and Kamat were hatching a conspiracy by hobnobbing with the BJP to engineer a split in the party.”