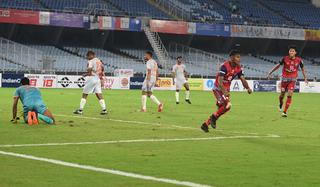 Jamshedpur FC beat holder FC Goa by a solitary goal in a Group-A league match to pick up its first win of the 131st Duran Cup football, at the Salt Lake Stadium here on Friday. Tapan Halder came in as a late substitute to find the only goal of the match for Jamshedpur in the final quarter of the action.

With both the sides fielding their reserve team players, the first session ended barren as none of the two sides could create the right scoring opportunity. Jamshedpur had the best chance in the 72nd minute when it won a penalty. FC Goa captain Lesly Rebello was hauled up for an infringement inside his own box on the Jamshedpur forward Lalruatmawia. But the Goa goalkeeper Hrithik Tiwari redeemed the situation by saving the penalty attempt of the Jamshedpur forward Vinil Poojary.

Jamshedpur continued to press for more and found the lead in the 84th minute when Tapan Halder controlled a nice through pass from Vikash Singh and finished on the half turn to ensure the full quota of points. Jamshedpur FC tallied three points from as many matches to tie with FC Goa, which also has the same collection of points and from as many outings.

Bartholomew Ogbeche scored a brace as Hyderabad rallied to beat a 10-man Chennaiyin FC 3-1 in an entertaining Group C match of the Durand Cup football tournament at the Khuman Lampak Stadium in Imphal on Friday.

Captain Anirudh Thapa gave Chennaiyin the lead in the 43 rd minute before his opposite number Joao Bruno converted a penalty to equalise in the 56 th minute. Ogbeche shot home in the 65 th and 74 th minutes to ensure his team’s second consecutive victory.

Following a cautious start from both teams, Chennaiyin grabbed the lead through a spectacular goal closer to the half-time

Sajal Bag sent in a long aerial ball and Thapa, strongly challenged by a defender, brought it down on the run before slotting it in despite being off-balance.

Hyderabad drew parity early in the second half. Javier Siverio’s header off an Akash Mishra cross fetched a penalty as defender Fallou Diagne was sent off for a debatable handball decision. Bruno beat keeper Debjit Majumder on the right with a fast grounder.

Controlling the pace, Hyderbad got the lead when Mohammed Yasir sent in a precise cross into the area and Ogbeche headed it in.

The Indian Super League champion extended its lead as Chhangte, positioned unchallenged inside the box, passed the ball back and Ogbeche jumped to execute another successful header.

Chennaiyin, which drew its first match, came close to scoring twice before ending up with a loss.