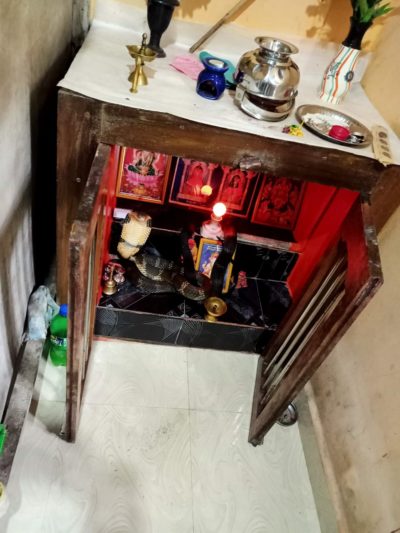 CANACONA – Even as the news of a 12 ft King Cobra rescued from a farm at Amboli-Sattari is afresh, an eight (8) ft long King Cobra is rescued from a residential house at Welwada-Poinguinim in Canacona on Saturday.
The 8 ft King Cobra was noticed hidden inside the Pooja Room of the residential house of Putu Sudhir when the inmates had taken up cleaning the room.
Well-known snake catcher and Forest Department official Santosh rescued King Cobra.
This King Cobra is found after the news of a 12 feet King Cobra on a farm at Amboli-Sattari was still fresh.
It was hiding inside the pooja room or Deva-Kud, and nobody knew since when and how it came there. However, when the residents were taking up cleaning of the Gods room, it showed itself’ but did not harm anyone.
The residents then informed the local snake catcher Satish Poinginkar, who also informed Forest officials and took the help of forest staff Santosh to rescue the reptile before taking it to safety.

Will the CM ever stop misleading Goans?

Chief Minister Dr Pramod Sawant has been caught telling lies once again and this time by the Central Empowered Committee set up by the Supreme ... Read More