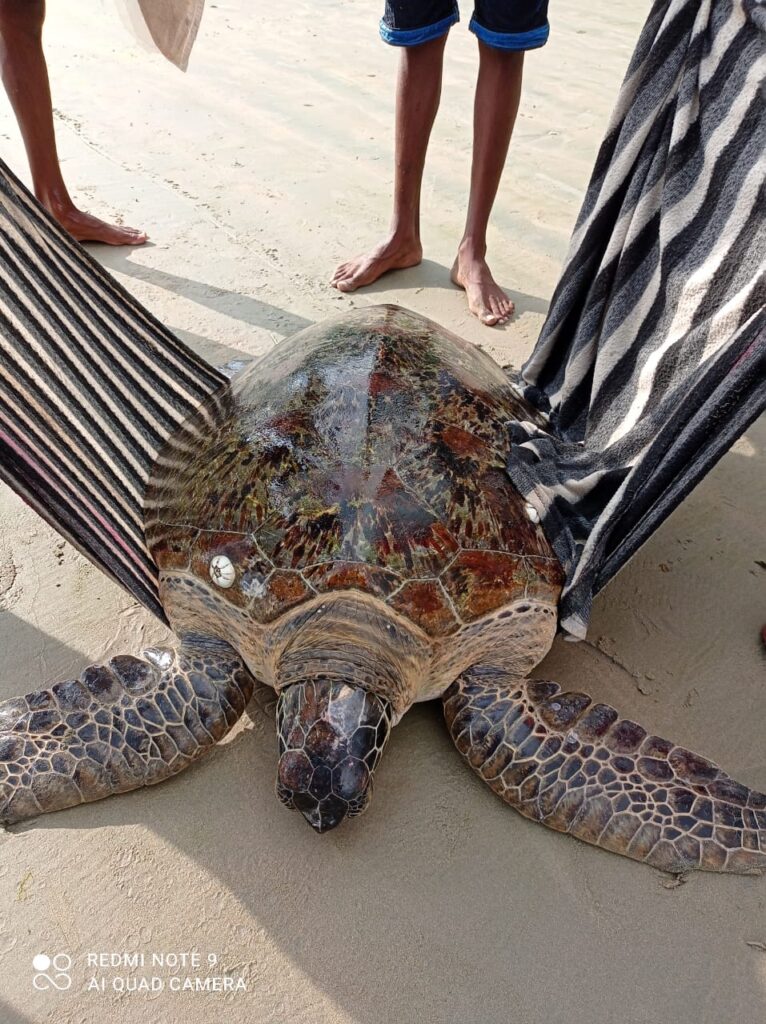 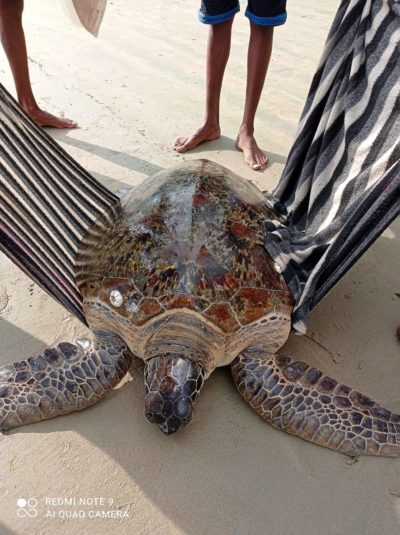 Canacona.
A fully grown adult Green Sea turtle which had got trapped in a net at Palolem was rescued by fishermen and later released back into the sea by forest department officials on Friday evening.
Sources informed that the sea turtle which had got caught in a fishing net(Raponn) was rescued first by the fishermen who had casted the net in the shallow waters of Palolem beach on Friday evening.
As the turtle was exhausted the forest department officials who were called by the bystanders administered saline with the help of veterinary officer from the local animal husbandry clinic.
Sources at the local forest department informed that the sea turtle measured about one meter and was an adult male.
When they arrived at the spot the turtle which they identified as Green Sea turtle was exhausted by his struggle to escape from the net and they had to call the doctor from the animal husbandry to administer drips they informed.
The same source informed that the Green Sea turtle also known as Green turtle, Black (sea) turtle or Pacific Green turtle is a species of large sea turtle of the family Cheloniidae and is the only species in the genus Chelonia.
Its range extends throughout tropical and subtropical seas around the world, with two distinct populations in the Atlantic and Pacific Oceans, but it is also found in the Indian Ocean.
The common name refers to the usually green fat found beneath its carapace, not to the color of its carapace, which is olive to black. 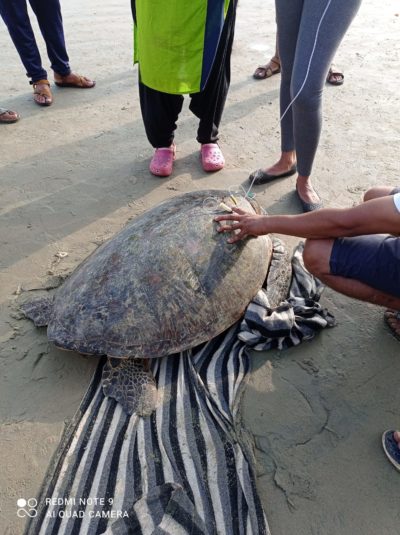 Manoj Prabhugaonkar an avid follower of the movement of sea turtles informed Goemkarponn that the Green turtle is one of the largest sea turtles and the only herbivore among the different species. Classified as endangered, Green turtles are threatened by overharvesting of their eggs, hunting of adults, being caught in fishing gear, getting killed due to injuries from moving water crafts and loss of nesting beach sites. While Olive Ridley turtles are the predominant species that make their visits to the beaches of Canacona, the green sea turtles also make a rare appearance when they lose their way in the Indian Ocean, he added.
Prabhugaonkar informed that carcasses of many sea turtles are getting washed ashore on the beaches in Canacona in recent times which is a worrying sign and needs to be studied thoroughly to know the exact cause of their deaths.
Most people and locals of Canacona are interested in saving the sea turtles but there is lack of coordination between the forest officials and the locals as well as the other departments, said a fisherman who was present on the shores when the turtles was being rescued.
“Since a more extensive research can be done only when the turtles are in the sea, the forest department should tie up with the coastal guard or even the local fishermen”, he opined.
“We are willing to help the forest officials in their efforts to save the endangered turtles”, said other locals at the site of the rescue.