EXPOSED: The “KHATTA-MITHA-Style” CORRUPTION in PWD

SURAJ NANDREKAR/ Goemkarponn
PANAJI: Chief Minister Dr Pramod Sawant this week announced that the PWD Engineers will be held responsible and strict action will be initiated if the roads are not repaired by November 1.
While the Chief Minister’s announcement is welcome, it obviously came due to pressure from social media and Congress’s “Spot the Pothole” Campaign.
However, the question remains why the Goan roads are in such bad condition are? Why is the Chief Minister not getting to the root cause of the issue? Why is PWD spending Rs 300- Rs 400 cr annually on the maintenance of roads annually when there is no actual maintenance?
Goemkarponn speaks to a PWD contractor who gave up the business recently simply because of large-scale corruption, from getting the contract to the settlement of the final bill.
His story resembles the same as the Akshay Kumar-starrer, Bollywood flick “Khatta-Mitha”. It exposes the corruption of the Public Works Department and the entire system.
The contractor, who spoke on condition of anonymity, said that right from the minister to the peon in the PWD has to be satisfied to get his final payment.
The contractor said that every PWD Minister has to be paid a commission of 10 p.c of the tender amount, and unless that is not paid in advance, the work order isn’t issued.
“Suppose the work is of Rs 5 cr, Rs 50 lakh has to be paid in cash,” he said. 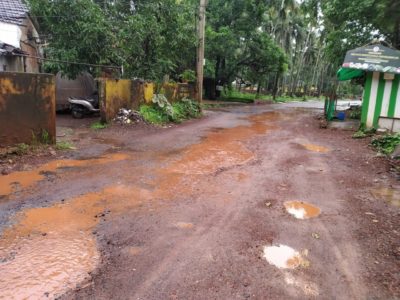 He says, after that, the Executive Engineer has to be paid 2 % straight, or you don’t get the work order in hand.
After getting the work order, the local MLA comes into the picture, who has to be paid 5% or creates roadblocks in the implementation of the project, he added.
“This is not all; the PWD head office takes a lump sum amount before starting every work,” he said.
When the actual work starts, the contractor informs that the PWD supervisor has to be compulsorily paid Rs 1k per day; otherwise, he does not give a green signal to carry on work the next day.
“If the work is done by hot mix, then Assistant Engineer is deputed on plant where he takes Rs 5k per day,” he says.
He says after all this, then comes the real struggle to get the bill payment.
“The testing labs take Rs 3k to issue certificate. The typist takes Rs 1k to type the bill, A peon takes Rs.500 to shift the file from one table to another. There five accountants for quality, measurements etc., to prepare bills who take a lump sum amount,” he said, adding, “after this, the Divisional Accounts takes 2 % for online payment .”
Now, he says, the roads are washed away very soon because of less use of bitumen by contractors to save money.
He says there is no compromise on quality of bitumen as it comes from Govt Cos like HP BPCL Mangalore oil refinery.
“Though JE/ AE are involved in corruption on adjustments of bitumen. Adjustments means if the thickness of road material is sanctioned of 45mm, then the contractor is asked to put 25mm so the cost indifference of 20mm in respect of labour material and machinery is pocketed by JE/AE” he says.
He says there is no end to corruption. “The contractor borrows money from Bank where he has to pay interest. Then he has to pay 30% income tax. At the end of the day, he lends in paying 60%. In the remaining 40%, he has to manage 3Ms – Man, Material, Machinery,” he says. He says many contractors are non-Goans, who do not mind paying the money, but only the Goan contractor feels the pinch.