Family fight in Mormugao given a political colour, says Lobo 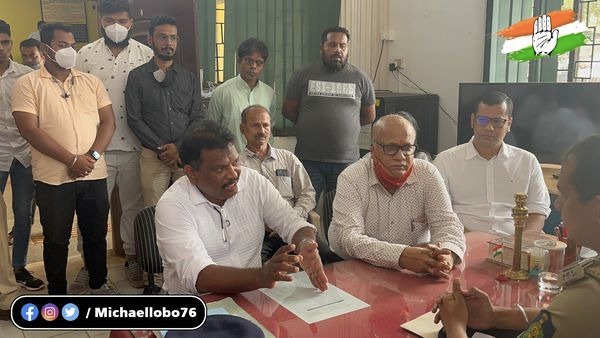 Goemkarponn desk
VASCO: Micheal Lobo, Digamber Kamat and other Congress leaders rush to the Mormugao police station after FIRs on some individuals were registered by the police.
On Sunday afternoon, some Congress leaders met Mormugao police and enquired about the issue of arrests and offence on several individuals from Sada area. Michael Lobo, Calangute MLA said that the police must not succumb to any pressure and start filing offence against anyone.
“The recent clash between the Mayekar and Bhagat families have been happening before, but later it was given a political colour to it. Offences against several people were registered by police when these people were just onlookers,” he said.
“The incident on the day of Holi in Mormugao is being given a political colour. A family feud has been blown out of proportion due to political pressure. I request that an impartial inquiry must be made without bowing to any pressure, and all those unjustly accused must be cleared. We, the Congress MLA’s, will stand together and not let ourselves fall prey to any political stunt targeted towards our supporters and us,” he said.
He further said Court gave them bail, and all of the arrested persons were released. But again, state verses 40 others offence was registered with same sections, and again these people got bailout.
Lobo added that the BJP must agree to the reality that Sankalp Amonkar has been elected as an MLA of Mormugao.
Margao Congress MLA Digambar Kamat condemned the incidence of filing FIRs in the individuals who were not involved in the clash between two groups during the Holi celebration.
Kamat said that the matter was not big, and there was no need to bring the police force in large numbers. They must digest that Congress candidate Sankalp Amonkar has won in the Mormugao constituency.
The filing of FIRs on innocent people sends the wrong message to the outside.
Adv. Carlos Alvares Ferreira, MLA of Aldona, said that he has warned the police that it is wrong to arrest the person succumbing to the pressure of someone. There is a judgement in this regard.
He further added that we have told this thing to police, and we will not leave anyone who has simply arrested people