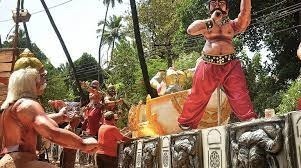 PONDA: The State Government has declared float parade on 19 March, but disappointed with last year’s bitter experience, the Kavlem float troupe member Sanket Narvekar said they have not decided yet to participate in the Float Parade this year.
Narvekar said that last year suffered losses as the float parade was cancelled at the last moment, and the Government did not pay them any compensation for the cost incurred on the Float.
He added that it is financially not affordable as competition is restricted to only five places, including Ponda, Margao, Vasco, Panaji and Mapusa.
He said earlier the contest used to be held at 15 places in Goa which would help them to recover the cost by winning prizes.
He said the aim behind preparing floats is not to earn money but to depict their art which gives them great satisfaction.
However, financial support is needed from the Government through prizes as Artist borrows money to prepare floats.
Sanket Narvekar, an artist and an active float troupe member at Kavlem, further said last year they had prepared a Float after the Government declared Shigmo and float parade; however, at the last moment,, the Government cancelled the Shigmo Parade due to the rise in Covid cases.
Following this, the float troupe members at Kavlem had requested the Tourism department to inspect their Float and provide some compensation for their incurred cost.
However, they did not get any reply or response nor any compensation, said Sanket Narvekar.
“We spent lakhs on preparing Float but suffered losses as Float parade was not held,” he said.
He said preparing a float is not an easy thing as it incurs a minimum of Rs one to three lakh, besides incurs Rs 25000 on transportation and at least need two to three months time with around more than two dozen artists work on preparing right from preparing effigy, paintings, lighting, decorations on trollies etc. and that one month is not sufficient for preparing a quality float.
He also said the Government should increase prize money for float competitions. Also, consolation prizes for Float should be minimum Rs 10,000 for each troupe, and it should be at least held at ten places in Goa so that participants not getting prizes could recover the cost of Float.
It may be recalled that last year the Government had declared a float parade at Ponda on 30 March, Panaji on 2 April and Mapusa on 3 April.
However, due to the rise in covid cases, the contest was cancelled it.
The artists from many parts of Goa had even gathered at Tisk-Ponda requesting not to cancel the competition, suggesting holding it and live telecast if people can’t gather to watch it.
According to artists, they are not making it to earn money but to show their art.
“The public appreciation is the greatest thing for us, but the Government should also look towards the monetary aspect in preparations of floats. Last year they were disappointed not only for they could not depict their art but also as the Government failed to pay compensation for the money they had spent on the preparations of floats,” he said.