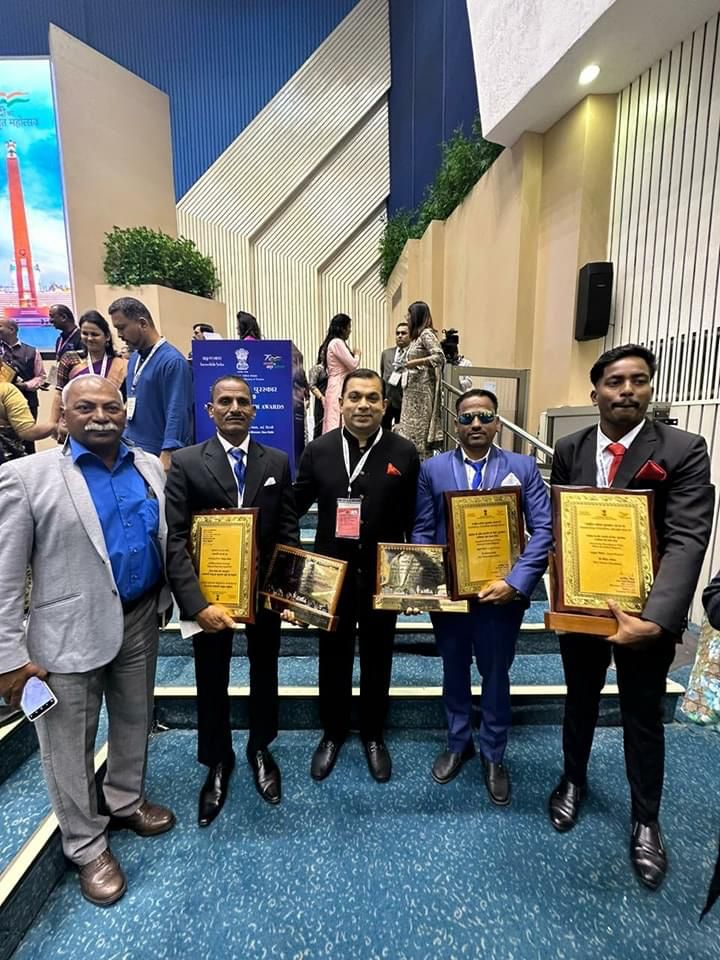 Goemkarponn desk
PANAJI: Goa Tourism was awarded National Tourism Award in the category of Devotion to Duty Awarded to four lifeguards of Goa tourism agency Drishti life saving, namely Shashikant Jadhav, M Gulablal, Ramesh Gaonkar and Nitesh Chendekar
The above National Tourism Awards were accepted by Rohan Khaunte, Minister for Tourism & IT, and Nikhil Desai, IAS, Director of Tourism Govt. of Goa, at the hands of Hon’ble Vice President of India Shri Jagdeep Dhankar in the presence of Hon Union Tourism Minister Shri J Kishan Reddy and Hon Union Minister of state for tourism Ajay Bhatt and Secretary Tourism Govt of India Arvind Singh.
The award was for devotion to duty when on 28 July 2018, they were involved in the rescue of 11 fishermen at Majorda beach. A fishing boat capsized due to strong waves around 100 m from the shore. A lifesaver on duty spotted the same and alerted the LG tower. Lifesavers Shashikant & Nitesh immediately rushed to the spot on a jetski with Ring buoys, Life jackets and rescue tubes. All victims were secured with rescue equipment. Shashikant secured 06 victims in total by making three rounds on the jet ski.
Meanwhile, another jetski from a nearby beach reached the spot for backup & rescued four fishermen. Another victim, who was about 20m from the shore, was secured by Gulabal with a rescue tube and brought to the shore. All victims were released after making a primary assessment as their health vitals of all were found to be normal.