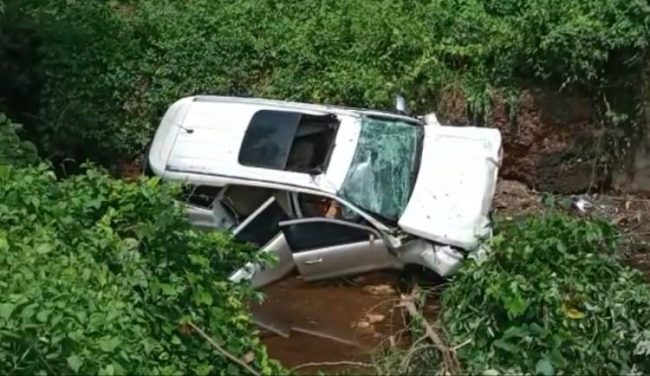 Goemkarponn desk
VASCO: A Sports Utility Vehicle (SUV) car plunged into the nullah near Reema Bar in Chicalim early Friday morning at around 4 am.
Four occupants (including the driver) were shifted to Goa Medical College in separate ambulances by 5 am.
The accident took place exactly 24 hours after the tragic accident on Zuari bridge, wherein 4 persons from Loutolim lost their lives.
Coincidently in both these incidents, SUVs have fallen into the waterbodies due to overspeeding.
On Friday early morning, an SUV car quickly reached the sharp turn near Reema Bar at Chicalim and slipped into the culvert. The four people travelling inside the car were injured. They were shifted in four separate ambulances and later referred to GMC for treatment, said Verna Fire station in charge Dilip Bicholkar.
An onlooker, Gautam, said he heard a big noise of a car falling into the culvert early morning.
He then rushed to the spot and saw that the travellers were injured in a car.
Then he called up the police and fire station. Gautam said the local police and Fire station staff helped the travellers to shift to the ambulance and admit in GMC.
Another local from Chicalim said that the wild vegetation is fully overgrown at this stretch of Chicalim near Reema Bar. There is no parapet wall to this culvert. There is no working street light, nor is there a speed breaker to reduce the speeding vehicle at this sharp turn.
It might be possible that a speeding SUV driver might have missed his judgement which led the car to plunge into the nullah.
Following the accident, locals demanded that proper street light illumination, parapet wall at the culvert, trimming of wild vegetation and speed breaker at this sharp turn is needed to avoid accidents.

Goemkarponn desk PONDA: In a miraculous rescue operation, a 50-year old woman, who was buried under the debris, was saved by local youth at Adpoi ... Read More