Gaondongrim only village to hold Gramsabha on Sunday in Canacona 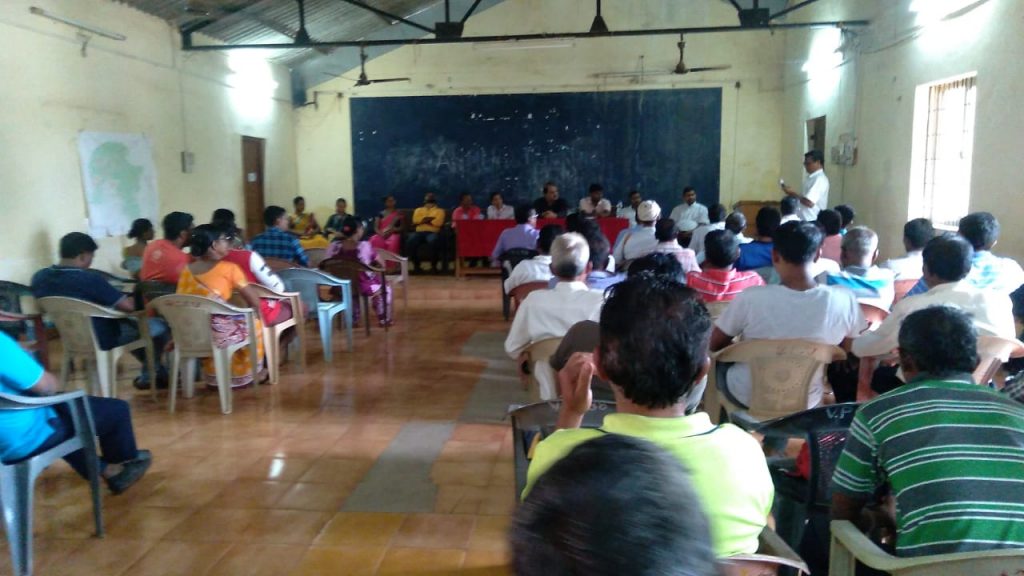 CANACONA: Gaondongrim is the only panchayat amongst 7 VPs of Canacona taluka to hold a Gramsabha on Sunday, as advised by the Canacona Block Development Officer (BDO), while five of the panchayats postponed the first Gramsabha of the newly appointed Panchayats to new dates, rescheduled Morning and Evening timings to enable Speaker Ramesh Tawadkar to attend.
Sources at the Khola panchayat stating the panchayat has received BDO intimation very late and will hold the grist Gramsabha only in the next 15 days.
It may be recalled that Canacona BDO, in a letter addressed to all the newly elected Sarpanchas, had asked to hold the Gramsabha on Sunday (11th September).
Gaondongrim is the only panchayat in Canacona to hold its Gramsabha on Sunday, while at least four other panchayats scheduled the same(Gramsabha) on 18th and 25th September in morning and evening times, reportedly to enable Speaker Ramesh Tawadkar to attend at all four Panchayat’s of Agonda, Khotigao (18th September) and Poinguinim and Shrishthal (25th September), Loliem-Polem panchayat is yet to announce the date of Gramsabha, informed sources.
Gaondongrim Sarpanch Dhillon Dessai, in the presence of Panchayat secretary Govind Velip, a BDO representative Megan and all the newly elected panch members chaired the meeting well attended by members.
The Secretary read the minutes of the last Gramsabha, which were confirmed, and further took up the issues proposed and figured out by the members.
There was a specific request to the Sarpanch to stop the dumping of chemical waste from a mushroom factory being dumped at an isolated place in the village. The smell is unbearable, and it has to be stopped’, members called on the Sarpanch m Sarpanch assured to take up the issue.
Members called on the Sarpanch to do away with a bling turn towards Shri Mallikarjun Devalaya at the village’s main centre, saying it has become an accident-prone aream.
Residents also asked Sarpanch to remove and retaining wall and fencing along the roadside towards Tudal, which affects the smooth flow of traffic.
There was a demand to facilitate a proper space or room for the electricity staff working in the village. The electricity line staff has no place to sit or take complaints though a register is maintained in Panchayat office, besides the staff has no proper toilet facilities. Sarpanch assured to provide a separate room to the electricity staff in consultation with the department.
A resident also brought to the notice of the panchayat that the road Vavurla is mostly filled with mud, and rainwater gushes on the road. The Sarpanch assured to work on the blocked gutters and provide sufficient passage for the water to flow.
Vishant Gaonkar of Ziltawadi, and Ulhas Gaonkar, were amongst the members who actively participated in the Gramsabha.
Meanwhile, according to sources, most of the panchayats in Canacona have postponed, and some have rescheduled Gramsabhas following directions from the Canacona MLA and GLA Speaker, who showed his interest in attending the same.
Accordingly, Agonda Gramsabha, originally scheduled in 11th, is postponed to 18th September to enable Speaker Ramesh Tawadkar to attend the same, informed a source in the panchayat.
Similarly, the Poinguinim VP has scheduled Gramsabha on 25th of September.
Sources further pointed out a few panchayats could not issue the mandatory 7 days’ notice to hold a Gramsabha as the Panchayat body did not hold its first meeting. While some have held a newly elected panchayat meeting as late as Friday of last week, Gramsabhas is scheduled on 18th September and beyond.
Khotigao sarpanch Anandu Desai informed Gramsabha will be held on 18th September, besides sources at Shrishthal VP informed the first Gramsabha is likely to be scheduled on 25rh September.
Loliem-Polem Panchayat will decide on the date by this week, informed sources.