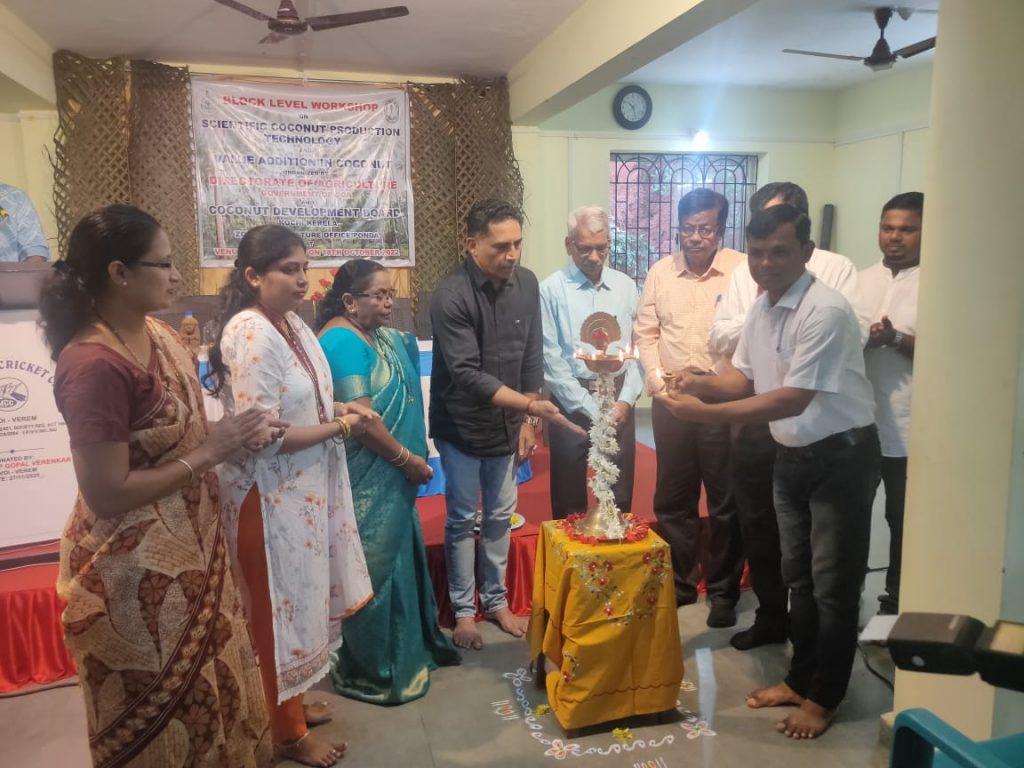 Goemkarponn desk
SAVOI-VEREM: Art and Culture Minister Govind Gaude has urged youths to learn various skills related to coconut, its shells, leaves and various other components to build their own business and become self-reliant.
Gaude was speaking as Chief Guest at the recently organised “Scientific coconut production technology and value addition in coconut” workshop held in the auditorium of Cricket Club Savoi-Verem.
The day-long block-level workshop organised by Verem-Vaghurme Panchayat in join collaboration with the Zonal Agriculture office Ponda and Coconut Development Board Kochi Kerala saw a participation of around 100 trainees.
Appreciating the initiative of the Government of Goa, Gaude said the State government organises various workshops to make farmers self-reliant.
He said coconut has multiple values. While its fruit is used to prepare food items, coconut shells and leaves are used for decorative purposes and have high value in local and international markets.
“Locals and youths should come in large numbers to take advantage of such government-organised workshops”, said Gaude.
Former officer of Indian Council of Agricultural Research (ICAR) Vishram Gaonkar addressed the participants on various cultivation practices and multi-cropping in coconut; former Agriculture Director Chitamani Perni illustrated pest and disease management and the future prospect of coconut crops. Geeta Velingkar spoke about value addition in coconut, while Deepal Naik illustrated various schemes available on coconut.
Panchayat level making of ‘food dishes out of coconut’ competition was organised at this time.
Sarpanch Shobha Perni, Panch members Babu Gaude, Lochan Naik, Akshay Naik, ZAO Pradnya Gaude Priolkar, AAO Shrikant Mone along with other delegates were present for the function.